… when it comes to scariest Halloween costume, anyway:

Once again, Hillary Rodham Clinton leads in a poll. This time, she was top choice when people were asked which major 2008 presidential candidate would make the scariest Halloween costume.

Yeah, she’s pretty scary all right, and this is what makes her so much so: 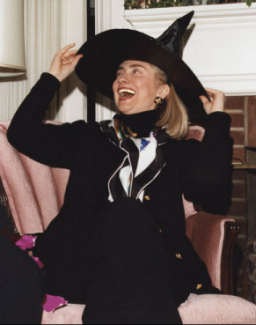