The Philadelphia Inquirer reports today that the Lehigh Valley IronPigs decided to change the name of their mascot to something less ‘offensive’ due to outrage over the nickname “PorkChop” by a Hispanic group:

Just two days after naming its mascot “PorkChop,” the Philadelphia Phillies’ new minor league franchise dropped the nickname after getting complaints from Hispanics that it was offensive.

The Lehigh Valley IronPigs – whose mascot is a giant, fuzzy pig – had chosen PorkChop from more than 7,000 fan entries. The team announced Monday that the mascot will now be dubbed “Ferrous.”

“We were really unaware of any negative connotations with the word ‘pork chop,”‘ he said. “If it offended a few, it’s a few too many.”

Guillermo Lopez, vice president of the Latino Leadership Alliance, said he was called “pork chop” when he worked at Bethlehem Steel decades ago.

“If my parents were alive, they’d be having fits,” said Lopez, among those who complained to the team. “It meant much more to them than it does to Puerto Ricans now in the Lehigh Valley.”

The IronPig’s new nickname – Ferrous – comes from the Latin word “ferrum,” which means relating to or containing iron. Ferrous was the most popular submission in the “Name the Mascot” competition. The name received 235 of the 7,345 suggestions.

Blogger Grande Pescados had this to say in response to the alleged derogatory nature of the term “pork chop,” as well as to the complaints from Lopez:

Now, I’ve been called and know lots of deragatory terms for Hispanics – wetback, fence jumper, border hopper, greaser, beaner, Lupe – but never in my life have I been called a ‘pork chop’ and I know quite a few people that are walking Wikipedias when it comes to racist terminology (in high school it was sort of a pass time to rip on each other’s ethnicity during lunch, baseball games, etc – for coming from a small town I would say we were a rather tolerant and open group when it came to shredding each other racially). Pork chop doesn’t even make any [edited – ST] sense.

People like Guillermo Lopez make me sick as an American with a Hispanic mother and as a man. Rather than take up causes that would truly make a difference he decides to get into a bitchy little slap fight over the name of a Triple AAA baseball team. I guess all the real issues Americans if Hispanic descent have been solved if this is the only issue Lopez can gin up to justify his paycheck.

WFMZ reports that Ferrous is an unoriginal name for the IronPigs mascot, as he shares his name with a minor league mascot in Maryland. The team name? The Aberdeen IronBirds. 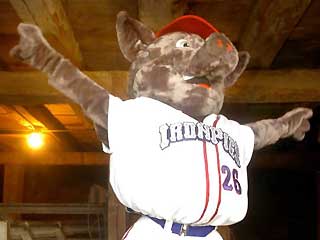 Hang in there, PorkChop, er, Ferrous, er –
whatever your name is!

17 Responses to "Offensive in Lehigh Valley, PA: There’s no pork chops in baseball!"