Remember several months ago, when John McCain took a question from a supporter who called Hillary Clintion the “b” word? The outrage stretched out for miles, and among those stridently condemning McCain for not taking the supporter to task was hypocritical View co-host Joy Behar, who had this to say in response:

SHEPHERD: What I’m saying is the same could be said, she felt Hillary Clinton was a bitch. And so she said it.

BEHAR: No, that’s a personal assault on the woman.

SHEPHERD: You do personal assaults on President Bush.

BEHAR: The difference is that I don’t like him.

I wonder if Behar’s outrage will be just as strident once she reads this:

From prostitutes yesterday to whores today — and people wander why politics is so entertaining. Randi Rhodes, the drive-time radio personality for Air America, the liberal talk radio network, now says HRC’s “a whore.” Geraldine Ferraro, too.

The audio is at that same link.

Will we hear/read the same outrage expressed by The Usual Suspects who often go ballistic when they think a conservative talk radio host is being too mean to their candidate, and who thought McCain should have stepped up and condemned the supporter’s remarks about Hillary, or will they largely consider it yawn-worthy because it’s “one of their own” who is crossing the bounds of decency (not that it hasn’t happened before, of course)? I vote the latter.

Any drinkers of Absolut Vodka out there? You may want to boycott the brand, after reading about an ad they ran in a Mexican magazine in which they portrayed the US and Mexico as looking like this (h/t: James Joyner): 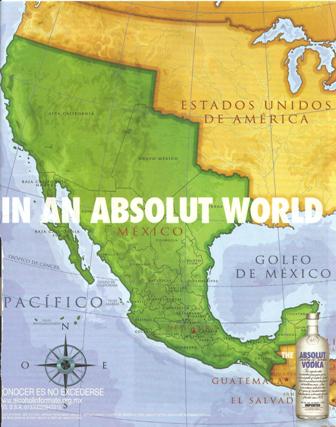 Here’s their contact info, in case you want to voice your disgust (via MM):

Air America radio has suspended talk show host Randi Rhodes for what has been described as an appalling rant against Democratic presidential candidate Hillary Clinton and Clinton supporter Geraldine Ferraro.

Rhodes used obscene language in her choice remarks during a March 22 appearance in San Francisco, sponsored by an Air America affiliate station. In a statement issued on the liberal radio network’s Web site, Air America chairman Charlie Kireker said that kind of salty talk has no place in the political dialogue.

“Air America encourages strong opinions about public affairs but does not condone such abusive, ad hominem language by our hosts” reads the statement by Kireker, issued on Thursday.

LMAO – so “joking” about assassinating the President is just fine, but calling two prominent Democrat women “whores” is worthy of a suspension. Got it.

Ferraro is, you guessed it, outraged:

Ferraro said Rhodes should be fired.

“What did they do with Don Imus when he went after the young black team who was playing basketball with kind of the same language? Treat them both the same” Ferraro told FOX News. “She’s coming at me and Hillary in a â€¦ sexist way”

Ferraro added that her comments about Obama were blown out of proportion and taken out of context so that the race card could be played, which was apparently effective since she has received a considerable amount of hate mail.

“To incite people with language like this young woman just did on radio is very, very dangerous because â€¦ some people take this stuff so seriously that it can affect your security” she said.

Please. If anything “incites” people to carry out attacks on a public figure it’s another popular public figure treating assassination as if it’s something “entertaining” that should be laughed about. As usual, we see a Democrat – in this case, a Clinton supporter – utilizing the Bill Clinton “it’s hate radio’s fault” line. Very telling how they only do that when it’s their ox being gored, eh?

Here’s a video of Rhodes’ remarks: