One of the President’s two twin daughters got married Saturday in a private ceremony at his Crawford, Texas ranch:

CRAWFORD, Texas – Jenna Bush and Henry Hager said “I do” Saturday at President Bush’s ranch in Crawford, in a private ceremony attended by family and close friends.

The president and the bride picked “You Are So Beautiful” for their father-daughter dance, according to band leader Tyrone Smith of Nashville, Tenn. Smith and his 10-piece party band, The Tyrone Smith Revue, was asked to do “Lovin’ in My Baby’s Eyes” by Taj Mahal for the newlyweds’ first dance.

The best man was the groom’s brother, John “Jack” Hager. Also part of the “house party” were 14 ushers, who walked with the 14 women down the aisle to their seats, but did not participate in the ceremony.

More than 200 family and friends converged here for the nuptials on the 1,600-acre ranch where a tent was erected for the post-ceremony dinner and dancing.

Here’s a photo of the bride and groom: 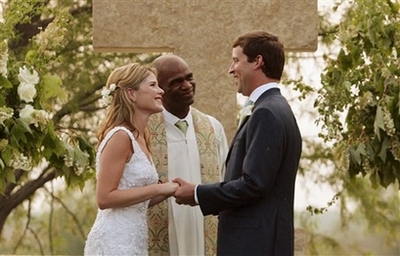 And a family photo: 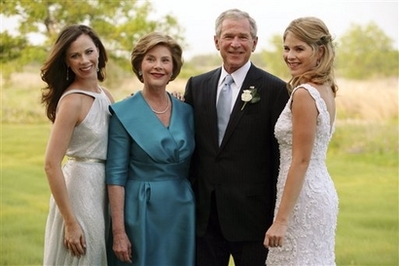 Jenna Bush has come a long way from the rebellious college student she in Bush’s first few year’s in office. It has to be tough being the daughter or son of a president, growing up before everyone’s eyes – and especially considering your every move is not only scrutinized by the press, but people who detest your father (William Teach at The Pirate’s Cove has documented some of what the far left have said this weekend in response to Jenna’s nuptials).

The last couple of years we’ve seen her do well for herself and come into her own. I wish both her and her husband well as they begin their life journey together.

4 Responses to "Congrats to Jenna Bush"