The Heritage Foundation, a conservative think tank, announced on its Web site [link here. –ST] that he died at 1:18 a.m. Friday after having been ill in recent years.

Helms retired in 2002 at the end of his fifth term in the Senate.

When the Republicans were the majority party in the Senate, Helms was chairman of the powerful Foreign Relations Committee, where he consistently moved U.S. policy toward the right, especially regarding the United Nations and Cuba.

He also held seats on the Agriculture Committee, where he looked out for North Carolina’s extensive tobacco industry, and on the Senate Rules and Administration Committee.

The Heritage Foundation’s president, Ed Feulner, hailed Helms as “one of the most consequential figures of the 20th century.”

“Along with Barry Goldwater and Ronald Reagan, he helped establish the conservative movement and became a powerful voice for free markets and free people,” Feulner wrote.

“The defeat of Soviet communism and the rise of Ronald Reagan would not have happened without his intrepid leadership at decisive times.”

The Senator suffered from vascular dementia. WRAL has much more.

Helms, a former Democrat, was one of North Carolina’s most controversial Senators. He was also almost universally despised by the left, and the media (but I repeat myself), thanks in part to his early days as a Democrat when he opposed desegration, but his legacy on race issues has been largely misreported and misconstrued for partisan purposes. Although Helms had made some controversial remarks about black people back in the 50s and early 60s, he was not a white supremacist. Even though he opposed the Civil Rights Act of 1964, he abided by the law and “got with the times” as they say. Claude Allen (who in the last couple of years got into trouble with the law), a black Republican who most recently worked in the Bush Administration from 2005 til 2006 as the “Assistant to the President for Domestic Policy,” worked as Jesse Helms’ campaign spokesman in the early 80s. Black civil rights leader James Meredith worked as a domestic advisor for Helms starting in 1989.

A lot of what you’ll read about Helms in the coming days will focus on some of his more infamous quotes, his alleged “racism and homophobia,” and will again bring up the (false) accusation that was showing his “inner racist” in the much-debated anti-affirmative action “Hands” ad he ran in 1990 against his opponent, former Charlotte mayor Democrat Harvey Gantt, who is black.

While the corks may be popping off the champagne bottles today of those who hated Helms the most, he’ll be remembered by yours truly as someone who refused to be politically correct in a world where attempts to choke off real debate about the issues continue to this day with almost reckless abandon. I’ll also remember him for unashamedly standing up for family values as he spoke out in favor of not changing the definition of marriage to whatever happened to be popular at the time, and for speaking out against irresponsible sexual behavior which led to the AIDS outbreak in the 80s and 90s. His opposition to radical liberalism and big government earned him a prominent, permanent spot in the hearts of many conservatives. If there was such a thing as a “Conservatives Hall of Fame” there’s no doubt that Helms would be one of the first inducted.

God bless and may you rest in peace, Senator.

Update: JammieWearingFool, in his post noting the far left’s glee, points out the original URL for the story on Helms’s passing (emphasis added by me):

Google’s got a link to it as well. Here’s the screen cap: 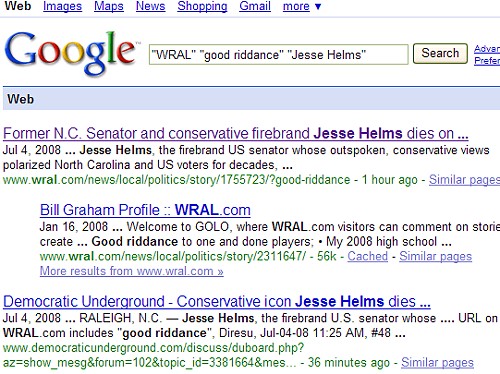 Update 2: A commenter claiming to be a WRAL editor, as well as an email William Teach at Pirate’s Cove rec’d from WRAL claims that anyone can add a question mark and add whatever words they want to after a URL and it will still work. Maybe so, but I’m still not totally convinced (as I noted in the comments), considering that actual URL appeared in my Google search, like it was cached.

The origin of this URL sounds like a job for Snopes.