The AP reports on some Norwegian concert organizers who got creative after finding out President Obama would not be attending the “Save the Children” concert as part of his Nobel prize tour (via Fausta):

OSLO — President Barack Obama’s decision to break with tradition and not follow the lead of past Nobel Peace Prize winners bewildered some Norwegians. Others thought he was being impolite.

Obama had quite a whirlwind day Thursday – he signed the Nobel guest book, huddled with Prime Minister Jens Stoltenberg, met with King Harald V and Queen Sonja, and delivered an acceptance speech after he was formally presented with the prize. He also joined the king and queen at an evening banquet.

But he skipped several other activities, including lunch with the king, a news conference at Oslo’s Grand Hotel, CNN’s traditional interview with the prize winner and a “Save the Children” benefit concert, where organizers replaced him with an Obama cardboard cutout. Obama also won’t be around for Friday’s Nobel Concert.

Here’s a photo (look to the right): 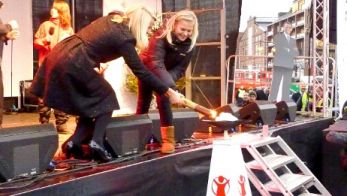 Hmmm. I think an empty suit would have worked better.