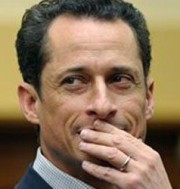 … er, wiener on Twitter, or was his yfrog account hacked?  Even more potentially disturbing, the picture (of some man who was, um, ‘standing at attention’ in his underwear) was Tweeted to someone who was not his wife.

In case you think you’re in the middle of a horrifying holiday weekend nightmare, I’m sorry to report that this actually did happen, although denials have been issued, accounts deleted, etc.  So The Truth™ right now is a bit murky and undefined. Publius at Breitbart’s Big Government site has the details, including Twitter screen captures of the timeline of Tweets,  the actual picture that was Tweeted (Not Safe For Work), etc.  Lee Stranahan over at Patterico’s makes things a little more intriguing by posting a screen cap of the timeline, and catching something speculative that Weiner posted earlier that evening that may or may not mean anything in the scheme of things.

I’m not sure one way or the other what happened, but I can speak from personal experience that it’s not uncommon for a Twitter account or some account related to it to get hacked. Mine was hacked a few weeks ago while I was Tweeting.  I caught it right away and deleted the offending Tweets, and changed my password, and everything has been ok since.  It was a little freaky, though, considering it was happening in real time while I was on.

With blogging, I have said before that there are some stories out there that most definitely fall under the category of “it’s a dirty job, but someone has to do it” – and I’m sure that there will be plenty of folks digging for more information on this story in an effort to either clear Weiner or indict him.  I shall not be one of them.  Yours truly will be headed out to a cookout later this evening – burgers only, no wieners, thank you veruh much – and will not be joining in on the “investigative” side of this story.  But, as always, I’ll keep you posted if anything develops …

12 Responses to "Did Rep. Anthony Weiner (D-NY) mistakenly Tweet a photo of his … um …"