It’s hard to believe (or perhaps not), but sometimes the politically correct sports media can be even worse than the mainstream media when it comes to anti-Christian bias and rabid sensationalism.  The NYT’s Toni Monkovic provides sterling examples, while being one himself:

The Tim Tebow success story, puzzling to some and entertaining to most, seems to have one obvious drawback: the injection of religion.

Or more specifically arguing over religion.

Arguing is not a problem in sports. Sports talk radio might not exist without it (WIP in Philadelphia might combust). Whose career has been better, Tom Brady’s or Peyton Manning’s? Have at it, no problem.

But arguing about religion – who needs it?

Jewish Week is apologizing for a controversial column about Denver Broncos quarterback Tim Tebow that said a Super Bowl victory by the Evangelical Christian QB could incite others to burn mosques, bash gays and banish immigrants.

For such a nice guy, Tebow has been a polarizing figure in the N.F.L. for a while. Last season, he  helped film a controversial Super Bowl commercial for a conservative Christian group, Focus on the Family, which strongly opposes abortion.

Last week, after the Broncos rallied to beat the Bears,  Mark Kiszla of The Denver Post had this nugget:

“Tebow came to me and said, ‘Don’t worry about a thing,’ because God has spoken to him,” linebacker Wesley Woodyard told me in a quiet corner of the Denver locker room.

Extra point  If Tebow and the Broncos keep winning, we’ll be discussing topics like: If Tebow were Muslim, would America think God was on his side? You may not be a fan of Bill Belichick, but if New England wins today in Denver, the talk may return to football — on who makes the playoffs, not on who qualifies for heaven. For one day, is it enough to make you a Patriots fan? 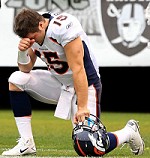 It’s interesting.  From what I’ve read of interviews with players, sports pundits, commentators, etc, it’s mostly the sports media who have turned Tebow into a “polarizing figure” – not Tebow himself.  How? By doing what the media, sports and non-sports alike, do: Sensationalize an issue to death with wall to wall saturation coverage, debate, “analysis” in our 24-7 news network coverage world.   In a world prior to 24 hour cable news networks, Internet columns, Twitter, and Facebook, the issue of Tim Tebow being a man of faith and trying to walk the walk accordingly would definitely make headlines, but it probably wouldn’t have turned him into a “polarizing figure” because there would be no 24 hour news vacuum cycle to fill.  Yes, the sports mediots would still try to pull negative quotes about Tebow out of the behinds of football players who really only want to talk about, ya know, football and themselves and how great they are, but by the time the stories were published, the Next Big Issue would have popped up and everyone would have forgotten about what Jake Plummer said about Tebow.  But we live in a techno-savvy, communications-rich, insta-news environment where every minute not filled with advertisements must be filled with “newsworthy” commentary designed to draw viewers, readers, ratings and ultimately sponsors.

They would never admit it, but this young Christian man has been a blessing (pun intended) to the sports media community for those reasons alone.

But you want to know what irks me more about the sports media outside of their need to generate controversy in order to bring in the viewers, readers, and ad dollars?  The fact that, with a few exceptions, they’ve essentially ignored and in all too many cases propped up for decades the arrogant “culture of me” mentality that permeates every facet of pro-sports, whether it be the bad “F— you” attitudes,  multi-million dollar player salary disputes, lavish after-game parties and other sports gatherings where drinking, drug use, steroid abuse, and serial adultery – and in some instances, sexual harassment –  are often ignored or overlooked because “that’s just the way it is in sports”? How many coddled, pampered,  sports player prima donnas have we all wished we could knock out  simply because they act like they’ve got it so bad, when in reality they’re being paid handsomely and treated like royalty simply because they know how to throw a football or hit a homerun?

Think about how a convicted rapist and all around thug like Mike Tyson gets treated by the sports media.  He “joked” recently on an ESPN-affiliated radio network about the idea of Sarah Palin being raped — to the howls of laughter of the shows’ “hosts.”    Here’s one of the despicable statements Tyson made that the hosts found so hysterically funny:

“Glen Rice is a wonderful man,” Tyson said. “He’s a wonderful guy. You want her [Palin] to be with somebody like [Dennis] Rodman getting up … in there. Pushing her guts up in the back of her head!”

In an ideal world, the advocating of a sexual assault on on a woman coming from anyone, including a world-famous controversial sports figure, would rightly generate nationwide condemnation and outrage from mainstream media types and sports media gurus alike.  But of course it didn’t work out that way because we don’t live in an ideal world.   What ended up happening was that, again with few exceptions, the only people outraged enough about not just Tyson’s comments but more importantly the show hosts’ perverse reaction to them to write about them were conservatives like myself.  Simply put, we live in a world where “tolerance” is given to prominent figures who represent the worst in our society, because those types of figures pull in ratings and ad cash – and in the rare instances they are taken to the woodshed it’s not because of what they said, but the target(s) of their comments.  For example, had Tyson made those comments about Hillary Clinton, we’d have never heard the end of it.

And think about the various sexual abuse scandals coming out of colleges, like Penn State and Syracuse.  Sports columnist Jason Whitlock has been all over the Syracuse Post-Standard’s handling of the allegations against Bernie Fine that Fine has molested young boys.  In a recent column, Whitlock wrote:

On Wednesday, Michael J. Connor, the executive editor of the Syracuse Post-Standard, published his rationalization on why in 2003 his newspaper did not turn over to police the tape recording in which Bernie Fine’s wife expressed concern that her husband had a sexual attraction for young boys and seemed to indicate he molested Bobby Davis. Connor acknowledged that Davis made the tape at the request of the newspaper. Connor explained that the information on the tape did not justify publication of Davis’ allegations against Bernie Fine. Connor’s explanation made sense. Laurie Fine’s statements were not clear-cut proof.

What was clear was that Davis’ allegations needed to be investigated by professional investigators.

“To us, though, our role has always been clear: to investigate with a goal to publish,” Connor wrote. “To us, handing over to police materials we didn’t feel confident enough to publish was unimaginable. Look at it another way. When police or the district attorney gather evidence and decide they don’t have enough to charge someone with a crime, do they deliver their evidence to us and say, ‘Here you go, we don’t have enough to prosecute but you might get a heckuva story out of this’? Of course not. We have separate and independent purposes, and are often locked in an unsteady dance around information that one has and the other wants.”

The Post-Standard (and ESPN) could’ve used the media spotlight to force the police to investigate Davis’ allegations. Had Connor taken the tape to the police chief in 2003 and said, “You have a month to look into these allegations or we’re running the tape and exposing your unwillingness to investigate this matter,” it would’ve been far easier to find the truth and protect any other potential victims.

“Imagine how quickly we would lose the trust of sources we rely on and readers who turn to us if we turned from watchdog of government agencies to lap dog at their call,” Connor wrote.

In their hunt for the big scoop, Internet clicks and ratings, [ESPN & the Syracuse Post-Standard]  concealed evidence from the police, unfairly released one-sided, inflammatory stories that convicted Bernie Fine in the court of public opinion and now they don’t have the courage to apologize.

At least Joe Paterno expressed regret he did not do more to stop Jerry Sandusky. Can we really blame the public for losing faith in the Fourth Estate? We might be the most arrogant and delusional group on the planet.

Advocating rape doesn’t generate non-stop outrage and coverage.  Allegations of sexual molestation don’t generate wall to wall outrage until someone finally decides to break the stories after they’ve been sat on for years. Then sports media outlets have to make up for lost time.  Same same for allegations that five-star Super Bowl-winning quarterbacks have either sexually harassed or raped women.  And stories of chronic drug and alcohol abuse by sports players rarely make the news, because the issue is so widespread that it’s almost not looked at as “newsworthy” anymore – if in fact it ever was.

But what does generate hours, days, weeks, and months of outrage and pushback in the sports media? Tim Tebow is a Christian who openly prays on the sidelines.  He’s not shy about expressing his belief in God.  Sometimes he points up to heaven when standing on the field. He pats his teammates on the back, tells them not to worry about a bad game, that God is in control.  He’s claimed he wanted to save himself for marriage. And, worst of all, he’s upfront about being thankful his mother didn’t abort him.

For this, Tim Tebow is a “polarizing figure” to sports writers, players, and even some fans?

Related Reading: Jen Engel – What if Tim Tebow were a Muslim?