Time for more blustering from the millenarian loons who run Iran. This time, it’s yet another threat to close the Straits of Hormuz if the world imposes more sanctions on Iran. It’s not a threat to laugh off; more than 15,000,000 barrels of oil per day from Gulf nations (not just Iran) pass through them on their way to the West and other destinations. As The Telegraph reminds us, that’s about one-third of all the oil shipped every day. Cutting it off would be disastrous for industrial economies, and this map shows that closing the Straits wouldn’t be that difficult: 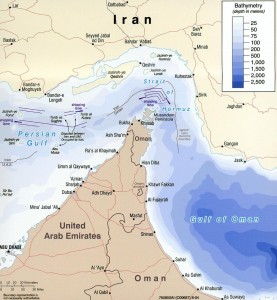 Anyway, Iran is upset that Western nations, lead by the Great Satan (that’s us), are considering sanctions aimed at their oil exports. In reply, they’ve threatened that, to paraphrase, “if our oil doesn’t get out, no one’s does:”

Iran’s navy chief said Wednesday that it would be “very easy” for his country’s forces to close the strategic Strait of Hormuz, the passage at the mouth of the Persian Gulf through which about 15 million barrels of oil pass daily. It was the second such warning by Iran in two days, reflecting Tehran’s concern that the West is about to impose new sanctions that could hit the country’s biggest source of revenue, oil.

To which the offices of our Fifth Fleet, based in the Gulf, said “oh, really?”

“The free flow of goods and services through the Strait of Hormuz is vital to regional and global prosperity,” said a spokeswoman for the US Navy’s Bahrain-based Fifth Fleet. “Anyone who threatens to disrupt freedom of navigation in an international strait is clearly outside the community of nations; any disruption will not be tolerated.”

That, Dear Readers, is polite Navy-talk for “bring it.”

Now, I’m not minimizing the potential for danger in such a situation; the Navy itself war-gamed such a situation in 2002 and the results were scary. But that was ten years ago, and I’ve no doubt Navy planners have been working on ways to counter Iran’s expected swarming attacks. We’re not as incompetent as we sometimes like to think, and neither is the (latest) enemy as tough as he likes to pretend. (In fact, the mullahs have a history of backing down when confronted by force.)

Freedom of the seas is one of the oldest and most enduring principles of American foreign policy, and, as a commercial republic dependent on foreign trade and free passage for our ships, we’ve several times shown ourselves willing to go to war to prevent a hostile power from threatening that freedom. Indeed, we’ve faced and taken down nations a lot tougher than Iran. Ask Japan about it, sometime.

So, I have a message for the rulers of Iran:

Go ahead, try to block the Straits. Send out your swarms of suicide boats and loft your planes with their missiles. You’ll certainly disrupt traffic and you may close the Straits for a few days. You may even sink a couple of our ships. Go ahead, high five each other and shout “Allahu akbar” to your hearts’ content. Enjoy it while you can.

Because, I guarantee you this: within a week, the USN will have cleared the Straits and sunk every single ship you have, including Admiral Sayyari’s dinghy. Not only that, but your planes will be shot down, your missile launchers destroyed, and your own naval bases reduced to rubble. The oil will flow again, and you will have nothing to show for it but ruin and humiliation.

As they used to say on an old TV show, “No brag, just fact.“

PS: This situation also points out why the next president, assuming he’s a Republican and a sensible adult, in both cases unlike our current fourth-greatest president ever, should as one of his first acts unclog the exploration and drilling permitting process the Obama administration has so gummed up. We are sitting on vast resources.

PPS: Yeah, I know. Obama does not exactly have a sterling record of defending American interests abroad. But, in this case, I argue he would have to act or see his reelection chances destroyed.