This really is what the intelligentsia in the MSM, academia, and the leadership of the Democratic Party think of most of the nation: 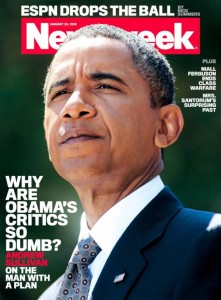 I don’t know about you, but I prefer this honest contempt to the patronizing variety we usually get.

For those not familiar with Andrew Sullivan, he had been blogger for The Atlantic, until he went off the deep end with wild conspiracy theories about THE TRUTH behind the birth of Trig Palin. Now he writes, supposedly as a conservative, for (what’s left of) Newsweek and The Daily Beast.

But we’re the dumb ones.

UPDATE: Joel Pollak asks, “Why is Andrew Sullivan so dumb?”

19 Responses to "At least Newsweek is honest"