A couple of weeks ago, I wrote a detailed post on the overwhelming evidence of mainstream media bias and narrative setting in the tragic Trayvon Martin case, which has thrust America into yet another race war thanks in no small part to MSM outlets like NBC and ABC, but also because of the usual race hustlers like Rev. Al Sharpton and Rev. Jesse Jackson pulling their usual manipulative tricks. Specifically, I focused on the blatant bias of ABC News journalist Matt Gutman’s Twitter feed, in which he declared, without evidence, that George Zimmerman “stalked, cornered, and killed” Trayvon Martin “because he was black and wearing a hoodie” (see numerous examples of Gutman’s bias on Twitter here). The bias in that series of Tweets were primary examples of how the mainstream media, in the early days of their “reporting”, created a destructive, false, and dangerous race narrative about the killing of Trayvon Martin, even going so far as to describe Zimmerman as a “white Hispanic” … as if his “white” half couldn’t contain itself when it came to “stalking, cornering, and killing” a teenager “because he was black.”

The corrosive, deceptive, sloppy, and oftentimes lazy reporting by some in the mainstream media has had a devastating impact on public perceptions of this case, and as a result Zimmerman had to go into hiding prior to his second arrest – not because he didn’t want to face up to his actions in a court of law, but because of death threats from freaks and bounties put on him by none other than the New Black Panthers. Not only has his life been under threat, but the mainstream media’s one-sided, sensationalistic reporting on this story has made it to where it will be difficult for George Zimmerman to get a fair trial (not to mention Obama’s stupid comments about “if I had a son he would look like Trayvon” made matters even worse!).

Fortunately, Gutman, unlike so many other mainstream media journalists, has somewhat redeemed himself today with his exclusive photo of the back of George Zimmerman’s head, taken just minutes after he killed Trayvon Martin in what he claimed was self defense:

His surprising testimony came the same day that ABC News exclusively obtained a photograph showing the bloodied back of Zimmerman’s head, which was apparently taken three minutes after he shot and killed Martin. The photo could give credence to Zimmerman’s claim that Martin had bashed his head against the concrete as Zimmerman fought for his life.

Here it is (full version at the above link): 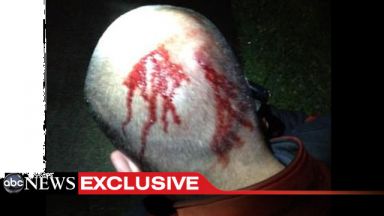 Does this boost George Zimmerman’s claims of self defense? You betcha it does. Does it make presumptuous media outlets like ABC and MSNBC look highly irresponsible for perpetuating the false myth that the grainy, crompressed video first reported on by Gutman and ABC where it was difficult to see any injuries on Zimmerman – meant he had to be lying about a self-defense claim? ABSO-FREAKIN-LUTELY.

Not sure whether the prosecution had this photo before deciding to charge George Zimmerman with 2nd degree murder, but if they did and still went forward with pressing that level of a charge, that makes them just as irresponsible as the mainstream media.

Even in light of this new photographic evidence, Zimmerman still may not get a fair trial in a court of law in the state of Florida. But in the court of public opinion, my opinion at least, the MSM can easily be proclaimed guilty of peddling a false racial narrative about George Zimmerman which has set into motion the deadly lynch mob mentality that has substituted for actual substantive discussion, debate, and analysis of this case amongst left wingers consumed with a thirst for identity politics game playing. The sentence for the mainstream media for their irresponsible reporting should be a thorough public shaming, currently in progress – and in the case of journalists like Matt Gutman, he’s guilty as charged as well – but in redeeming himself somewhat with this photo and report, he shows that not all agenda-driven mainstram media reporters are beyond hope.

And speaking of, let’s hope this is a just start. But I won’t be holding my breath – and nor should you.