Well, I guess he couldn’t be our first Black president, since Billy Jeff already has that title. So Obama will have to settle for being our first Gay president (1), as annointed by Newsweek: 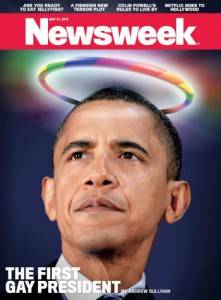 And do note the required religious symbolism (gag!), proclaiming our Lightworker (2) chief executive as not just our first Gay president, but some sort of rainbow saint. This, of course, comes from the Obama marketing rag whose editor once proclaimed Obama “like a god.”

Funny, that god-like saint apparently tried back in 2008 to bribe his racist ex-pastor, in whose church he sat for over 20 years without ever noticing he was a flaming bigot, to shut up. Through intermediaries and with full deniability, of course.

Hardly what one would expected from such an enlightened, sensitive being. Except one from Chicago.

Footnotes:
(1) Does this mean he’ll finally speak out for all the gays tortured and murdered under Islamic regimes? Nah. They don’t vote here.
(2) I’m never going to let you live this down Morford. It’s fawning toadies like you who feed cults of personality.