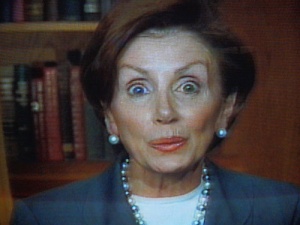 Sure, all politicians lie to one degree or another; the need to run for election and reelection, and to build support for policies, encourages it. Most of the time it’s just a bit of spin or shading, or ignoring key contrary facts. Minor stuff. We’re used to it.  We expect it, even.

But when they tell us bald-faced, easily disprovable total lies, that says only one thing: “We think you’re such rubes, you’ll believe anything“:

Daniel Halper has called attention to Nancy Pelosi’s remarkable interview with Al Hunt on the topic of Barack Obama and Israel. I’d note one comment in particular: Pelosi’s claim that President Obama “has been there [Israel] over and over again.”

Wow. I’m involved with the Emergency Committee for Israel. We have an ad up in several states calling attention to the fact that President Obama, who’s been quite the world traveler, has never visited Israel as president. Did we make a terrible mistake? Were we unjust to President Obama? Do we have to pull down the ad?

No, no, and no. Contrary to Pelosi’s apparent claim, President Obama hasn’t been to Israel over and over again. He’s never been as president, which is certainly what Pelosi implied. Well, maybe he visited Israel “over and over” before becoming president, and that’s what Pelosi meant to say? No. When he was senator, Obama went on two trips to Israel, once with several other freshmen members of Congress, and then as a presidential candidate. And he’d never been interested enough in Israel to visit as a private citizen. So much for the notion that Obama’s been “over and over again.”

But truth doesn’t matter to the Pelosis of the world: it’s the Big Lie told over and over again, in the hope that it snares just enough voters, that really matters.

And these are the leaders of the Democratic Party.

15 Responses to "The Democrats think Americans are idiots, one in a series"