The first from the ruins of our consulate in Benghazi: 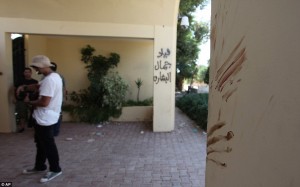 Those are the bloody hand prints of an American, desperately fleeing for his life. They are the fruits of the Obama-Clinton policy of “smart power” and speak more loudly than any words can of the administration’s utter failure. (Courtesy of the Daily Mail via QandO)

Then there’s the home front: 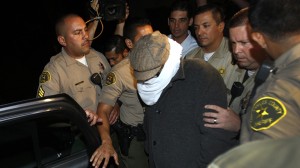 That is a free man being taken away by police under pressure from an administration desperate to blame anyone but itself for the collapse of its Mideast policy. While he may have violated his parole, he was investigated because his speech made the government uncomfortable. My blog-buddy ST has already vented her outrage; my own feelings are a burning contempt for this open display of Chicago-style thugocracy — Benito nods in approval. And Glenn Reynolds, the Instapundit, is livid:

By sending — literally — brownshirted enforcers to engage in — literally — a midnight knock at the door of a man for the non-crime of embarrassing the President of the United States and his administration, President Obama violated that oath. You can try to pretty this up (It’s just about possible probation violations! Sure.), or make excuses or draw distinctions, but that’s what’s happened. It is a betrayal of his duties as President, and a disgrace.

He won’t resign, of course. First, the President has the appreciation of free speech that one would expect from a Chicago Machine politician, which is to say, none. Second, he’s not getting any pressure. Indeed, the very press that went crazy over Ari Fleischer’s misrepresented remarks seems far less interested in the actions of an administration that I repeat, literally sent brown-shirted enforcers to launch a midnight knock on a filmmaker’s door.

But Obama’s behavior — and that of his enablers in the press — has laid down a marker for those who are paying attention. By these actions he is, I repeat, unfit to hold office. I hope and expect that the voters will agree in November.

If we weren’t so close to the election, I’d be calling for President Obama’s impeachment for dangerous incompetence and gross abuse of power.

But we don’t need Congress to clean house for us. As Glenn points out, we have an election in less than two months. Send these photos and the linked articles to anyone you know who’s still undecided. Make them aware of what’s happening.

A vote for Obama is a vote for American decline and to entrench “gangster government,” the thugocracy, and liberal fascism.

LINKS: Twitchy — “This is not America.”  In 2008, I and others wrote about Obama’s contempt for free speech. Hey, my fellow citizens, we tried to tell ya…