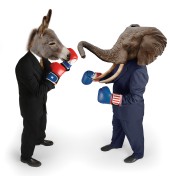 Yes, I’ll be watching but only reluctantly.  I hate that these things not only boil down to one-liners, flubs,  and “gotchas” – not to mention the typical unfairness of the moderators – but I also don’t like the fact that there are so many people in this country who don’t judge the sum total of a candidate’s public service career but instead judge them through the prism of 60 second canned answers to complex issues.

I hope Romney does well, of course, but even if he does the MSM will still paint it as a “win” for President Obama.

Debate time is 9 ET. For those who can’t watch it on TV, you can catch it at C-SPAN.

I”ll be doing some live-tweeting on and off of the debate as well.