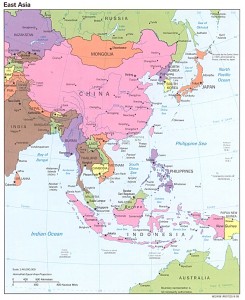 The Philippines would strongly support a rearmed Japan shorn of its pacifist constitution as a counterweight to the growing military assertiveness of China, according to the Philippine foreign minister.

“We would welcome that very much,” Albert del Rosario told the Financial Times in an interview. “We are looking for balancing factors in the region and Japan could be a significant balancing factor.”

The unusual statement, which risks upsetting Beijing, reflects alarm in Manila at what it sees as Chinese provocation over the South China Sea, virtually all of which is claimed by Beijing. It also comes days before an election in Japan that could see the return as prime minister of Shinzo Abe, who is committed to revising Japan’s pacifist constitution and to beefing up its military.

Anyone who knows anything about the history of World War II in the Pacific knows the brutal, almost unspeakable suffering the peoples of East Asia suffered under Japanese occupation. The Philippines alone lost roughly one million people. Many who survived were nonetheless subjected to torture and starvation, or knew those who were. That’s still in living memory for many Filipinos, making it understandable why they would fear a militarily powerful Japan, and why Rosario’s announcement is such a shocker.

Today, the Philippines is thought to be one of the countries most subject to Chinese pressure. It has a weak economy and a small military. That a country like this is rallying against China rather than joining up with it, and doing it in such a dramatic way, tells us a lot about what is going on in Asia and the effect Beijing’s foreign policy is having on its neighbors.

China has been anything but deft in its handling of its neighbors, making aggressive claims to islands in the South China Sea, possession of which would give it control of potentially vast oil wealth under the sea bed. This, however, has also had the effect of frightening its neighbors and leading them to seek allies from amongst old enemies.

And now the Philippines, worried by Beijing’s ambitions, wants a rearmed Japan to balance China. (How soon will they be inviting us back into Subic Bay, I wonder?)

This has implications for Japanese politics, too. Japan has a general election in a few days, and the expected winner, Shinzo Abe, has advocated changing Japan’s highly pacifist, restrictive constitution to allow for greater military spending and a larger overseas role for Japan’s military. Concerns about China, where nationalist anti-Japanese protests have become a regular occurrence, and a growing approval of Japanese rearmament from her former enemies could give Abe’s party a boost, in which case we could expect to see Sino-Japanese relations become much more strained.

Obama has made a “pivot to Asia” a focus of his administration’s foreign policy. That’s actually logical (1), but no one should underestimate the challenges Washington faces there.

Footnote:
(1) Yes, I’m surprised. Given the general incompetence Obama, Clinton, and the rest of the Smart Power team have shown in foreign affairs, they’ve generally done a good job in East Asia. I’m sometimes tempted to think it’s the doing of some Undersecretary acting on his own, hoping the bosses won’t notice…

6 Responses to "Want to know how badly China has bungled its foreign affairs?"