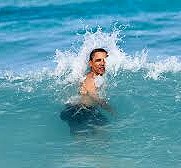 While our celebrity President has gone back on sunny vacation after spending the bare minimum time in DC to demagogue the opposition party regarding the fiscal cliff “crisis”, I thought it would be a good time here in the new year to note that the “savior” who vowed to “protect the middle class”  has done a damned lousy job of it.

Like all of you reading this, the 2% FICA increase hit my paycheck this week, and all totaled for the year I’ll be paying roughly $1200 more to Uncle Sam. Pair that with having to halt 401k contributions in the last year, and also seeing health insurance premiums rise to the point I had to choose a less expensive plan with a higher deductible.  This wasn’t the “rescue” the President promised, was it?

The fact of the matter is that all of this was entirely predictable from the get go – when Obama was a candidate for President the first time around. Taxes weren’t just going to go up on “the rich”, they were going to go up on us all because WE CAN’T SUSTAIN GOVT AS IT STANDS WITHOUT HIGHER TAXES, FINES, FEES, ETC BECAUSE THEY SPEND TOO FREAKING MUCH AND CONGRESSIONAL DEMOCRATS WON’T CUT A DIME UNLESS IT RELATES TO DEFENSE SPENDING.  Then it’s open season.

Even some liberals are finally starting to get it, as Twitchy.com notes here. Toldjah So, morons!  You can’t expect for government to “provide” for the things you “need” without them being paid for BY ALL OF US. NOTHING THE GOVT “GIVES” YOU IS FREE.  NOTHING.

So to the willfully ignorant jack asses who think health care is now “free”, and that anything else you “need” from the government is “free” – and who now are seeing less in their paychecks every week (as a result, in part, of what YOU advocate), has to pay higher health insurance premiums, has to scale back on 401k, etc: HAVE YOU LEARNED? You can’t have your cake and eat it, too.  Who best decides how to spend your hard-earned money – you? Or Uncle Sam?

Related: Daily Mail – Workers making $30,000 will take a bigger hit on their pay than those earning $500,000 under new fiscal deal