Just gorgeous.  Photo via Kevork Djansezian/Getty Images.  Click the image for the (much) bigger version, and to see more photos from today’s events. 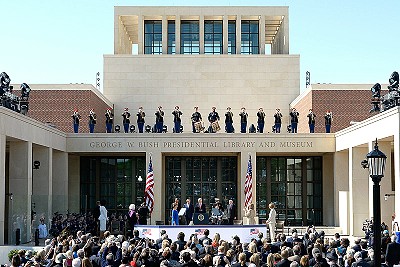 Fox News has a nice write up on the ceremony, and you can learn more about the GWB Presidential Center by clicking here.

Not many people would say this, but I miss the guy. Don’t like everything he did but I know one thing for sure: That man loves this country and everything he advocated while President he did so in what he thought were the country’s best interests. May God continue to bless President Bush and our former First Lady Laura Bush.

9 Responses to "Photo of the Day from the dedication of the George W. Bush Presidential Center"