Bill Clinton and Oprah Winfrey are among 16 individuals President Barack Obama has named as recipients of the President Medal of Freedom.

The medal is the nation’s highest civilian honor — presented to individuals who have made “especially meritorious contributions” to U.S. security or national interests, to world peace or to cultural or other endeavors.

This year marks the 50th anniversary of the executive order signed by President John F. Kennedy, establishing the medal. Since that time more than 500 have been awarded.

“The Presidential Medal of Freedom goes to men and women who have dedicated their own lives to enriching ours,” Obama said. “This year’s honorees have been blessed with extraordinary talent, but what sets them apart is their gift for sharing that talent with the world. It will be my honor to present them with a token of our nation’s gratitude.”

And what is the ‘official’ WH bio on Ms. Steinem?

Gloria Steinem is a renowned writer and activist for women’s equality.  She was a leader in the women’s liberation movement, co-founded Ms. magazine, and helped launch a wide variety of groups and publications dedicated to advancing civil rights. Ms. Steinem has received dozens of awards over the course of her career, and remains an active voice for women’s rights.

What a load of baloney. “Activist for women’s equality”? Considering over half the unborn babies aborted since Roe v. Wade were girl babies, and considering the epidemic of sex selective abortions in China and India – which she has said next to nothing about – I think calling this woman an “activist for women’s equality” is stretching it quite a bit. I’ve said it a million times: If you’re ok with the abortion of millions of unborn girl babies because you think abortion should be considered “sacred ground”, you are not pro-woman. You are pro-ABORTION. 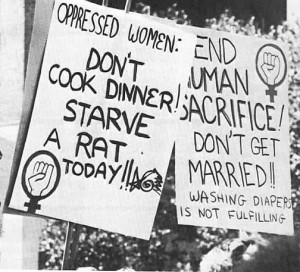 Add to that the popular sentiment at the time that was pushed by Steinem and other prominent “feminists” that traditional female roles equated to “slavery” and “women needed men like fish needed bicycles” – basically, in so many words, demanding that women view men as evil “patriarchal beings” who only viewed woman as necessary in two places: the kitchen and the bedroom.  While it’s true that mindset existed among some men at the time, it was a blanket assertion about ALL men made by these so-called “pioneers of feminism” that stretched the bounds of credibility by a wide margin. Were there men who wanted to keep their wives stashed away at home then? Yes. Do those type of men still exist? Yes. But in either era – the “Second Wave” era in the 60s and 70s and now – those types of men are far outnumbered by the types of men who are perfectly ok with the women in their lives, whether it be their wife, sister, daughter, mother, etc., balancing a career and home life.  Not only that, but these same men view serious (not casual sex) relationships with the opposite sex as a “50/50” thing in terms of the decision-making process.  Husbands and wives discuss if its feasible for the wife to stay home once she becomes pregnant and to be a stay at home mom for the first five or so years of their child’s life.  They discuss the balancing act of a woman being pregnant and choosing to continue to work.  In other words, they share their opinions with each other, talk things out, and come to decisions on family-planning and family-raising jointly. THAT’s equality, “feminists.”

I don’t even think it’s arguable that the Steinem and other Second Wave feminists actually did more harm to women than good.   Had she and others like her confined their “women’s rights” arguments to “equal pay” and “equal say” and “equal voices” when it came to home, work, and other life issues, it’d have been one thing. But they extended it beyond that to include abortion as a “right” – telling women that their carelessness in the bedroom was no big deal because abortion was a “solution”, and then they coined the term “reproductive freedom”, which essentially says that if a woman wants to abuse her body by engaging in rampant promiscuity by way of casual sex with multiple partners before she settles down … if she even wants to settle down … then it’s ok.  Because guys do it and get away with it. There was and continues NOT to be an argument in favor of raising the standards of guys up to the level women used to be held to. It’s more like, “Hey, if guys can do this without being criticized for it, then why can’t we?”  This attitude has failed women in so many ways, and has pushed them into the “modern” way of viewing themselves as nothing more than lady parts. That’s NOT real feminism, people.  This is regressive, irresponsible, and dangerous thinking.  And it’s VERY harmful to modern women.

As a side note, think about it: Who did the “sexual revolution” of the 60s with their free-love and casual-sex attitude really benefit the most? Feminists or men who, as a result, got a free pass to engage in the very type of base behavior they were so vilified by “feminists” for engaging in … the exact type of base behavior that feminists themselves argued they should be able to mimic without condemnation! You really can’t make this stuff up.

Coupled with the much-praised “Great Society” programs of the time – which were, shockingly enough, also promoted by leftists – the sexual revolution has had lasting negative effects on the family structure and by extension is what has caused many of the social problems we have and continue to pay for today, literally and figuratively speaking. STDs and related diseases have became commonplace. Over 40 million abortions have been performed since 1973.   Illegitimacy is alive and well – and still growing.   The crime rate is disproportionately high in the black community, which can be directly tied to the rise in single-parent households. Read any number of studies on crime and poverty and you’ll see the root causes of much of the crime and poverty that we see today can be directly traced back to either a bad home life or a home life that did not include both parents. We didn’t have widespread issues with poverty and crime and disease before the sexual revolution and Great Society program implementation. But we did after. Still do. And who do most Americans turn to for “solutions” to these issues? Government, of course. Which is why it continues to grow and balloon.

So, no, I won’t congratulate Ms. Steinem for the honor of being named as one who will receive the Presidential Medal of Freedom.  She and her ilk may have think they  helped “liberate” women across America with their bra-burning and their demonization of men and the two-parent family, and their push for “abortion rights for women”, but in reality their belief system has killed millions of women in the womb over the last 4 decades, and for the ones fortunate enough to be born there is not the enslavement to the stereotypical “patriarchal male” anymore but instead a lifetime of servitude to Uncle Sam – which is even worse.

No thank you, ma’am.