News has been coming in indicating that the Crimeans have voted with about 93% in favor (1) to secede from Ukraine and join Russia. Funny how that works, isn’t it, when there are tens of thousands of Russian troops all over Crimea, not to mention these… “campaign workers:” 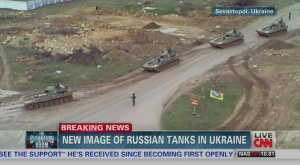 Anyway, I had planned to write about our feckless foreign policy and our pathetic response to Putin’s “19th-century behavior,” but The Diplomad and the XX Committee have both beaten me to it. First the Diplomad:

Silly talk and posturing, the making of grand-sounding statements, and drawing erasable “red lines” all have consequences. One, of course, is that Russia is not likely to undo its actions in Crimea. The Russians, furthermore, have sanction-like weapons of their own such as the messing about with US banks and debt noted above, but not limited only to that. They are major suppliers of gas to Europe and in the past have shown a willingness to interrupt supplies for political purposes.

So while we gut our military, refuse to buy Canadian oil, or become energy independent and a major supplier of energy to Europe, we prattle on and on about sanctions and international law and solidarity with the Syrian opposition Ukraine. As noted before, we could neutralize Russia’s leverage in the world very swiftly, without ever mentioning the word “sanctions.” That, however, requires something we do not have, to wit, patriotic, committed, focused, and decisive leadership.

Metternich and Kissinger, our guys ain’t.

Lewis Amselem, “The Diplomad,” links to a post he wrote describing what we could do to make Putin’s life miserable. I highly recommend it, but, if you haven’t the time to read it, I’ll give you the executive summary: fracking. Putin must be pinching himself at his unbelievable luck, that we have leadership too blinkered by ideology and environmentalist PAC money to do what needs to be done.

Meanwhile, Naval War College professor John Schindler, writing at The XX Committee, has this to say about our current crop of diplomats and national security personnel:

However, the rot goes far deeper than this White House, and is not confined to any party; indeed, the remarkable decline in American foreign policy over the last generation is one of our few truly bi-partisan national efforts, so there’s no point in fantasizing that an election or two will change this. This sad truth I explained in a recent post which got quite a bit of attention, particularly this part:

“A related factor here surely is that the United States has groomed a whole generation of foreign policy wonks-in-training who lack any real understanding of how the world actually works. These impressive-on-paper people – let it be noted they are legion in both parties – the under-45?s who are always graduates of the right schools and first-rate players of The Game in Washington, DC (which really comes down to cultivating the right mentors who will guide you to the proper think-tank until your party returns to power), are no match for the stone-cold killers of the Kremlin, led by the Chekist-in-Chief Putin. They have grown up in a world where unipolar American power has never been challenged, and while they can utter pleasant, Davos-ready platitudes about the whole range of bien pensant issues – global warming, emerging trends in micro-finance, gender matters on the Subcontinent, et al – they have quite literally nothing to say when old-school conventional threats emerge and enemies – yes, enemies: not rivals or merely misunderstood would-be partners – emerge from the darkness with conquest and killing on their minds.”

We’re in the best of hands, no? Our leadership prattles on about how dismembering other countries “just isn’t done,” while Vladimir Putin goes right ahead and does it.

Anyway, I suggest you put both sites in your feed reader, if you haven’t already. The insights they provide are invaluable.

RELATED: Did you know Putin has recently reported as saying that the breakup of the USSR was illegal? That should make the Evil Empire’s former satrapies happy, especially as more Russian troops mass at Ukraine’s borders for “exercises.” Oh, and Russia’s toadies in Belarus have mobilized, too. And if you wonder what Russia has in mind, besides keeping access to a Black Sea port (Sevastopol) and thus the Mediterranean, have a look at these maps.

Obama and Kerry blather about the “international community” and “sanctions,” but it’s really all about the realities of power. Putin gets it, they don’t.

Footnote:
(1) Sloppy, Vlad. Kim Jong Un will be disappointed in you.

3 Responses to "Crimean “election” and our feckless foreign policy"