FiveThirtyEight has some worrisome news for NC’s Senator Kay Hagan (D) this morning (via Memeorandum):

In the past six months, eight generic ballot polls have been released with an 18- to 29-year-old cross tab. Together, they add up to well over 1,000 respondents. 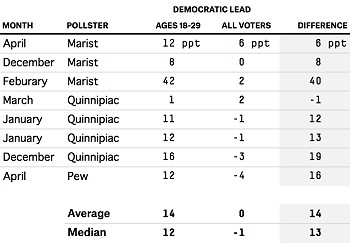 Democrats clearly hold a lead among young voters. Across the eight surveys from Marist, the Pew Research Center and Quinnipiac, Democrats hold an average lead of 14.3 percentage points and a median lead of 12.5 points. The median may be a better indicator because of the outlier Marist poll from February, though both results are close to each other. A 14.3-point win among 18- to 29-year-olds for Democrats would match their 2010 election performance, while 12.5 points would be a little worse.

This news comes on top of a recent Harvard Institute of Politics poll that indicated that younger voters were losing interest in the political process – but that those who were still interested are more likely to vote for the GOP. While a declining enthusiasm for voting among younger voters – and perhaps less of them identifying as “Democratic” – is bad enough news for Democrats in general in a critical election year, it’s especially bad news for NC”s Kay Hagan, who owes credit for her 2008 victory here entirely to the youth vote.  As I noted recently on Twitter, Hagan will have to perform a tricky two step here in North Carolina: Convincing her core base of staunch leftists to support her while at the same time attempting to pass off a “moderate” facade to middle of the road voters who could swing either way.  She’s already having trouble with the former, and the latter will be a tough sell considering she votes with the President 96% of the time.

Waning youth interest has not been lost on our celebrity President, who noted yesterday at glitzy $10,000 to $30,000 plate fundraisers in California, “When they get discouraged they don’t vote…We have to break out of that cycle, and that is what this election is about.”  That might sell well in reliably blue states like California where trust in Uncle Sam is sacrosanct, but here in North Carolina where voters are understandably more cynical about government, making a convincing argument to the contrary will be a tall order indeed.

One Response to "Bad news for #NCSEN’s @KayHagan: Younger voters could lean less Democratic this year"