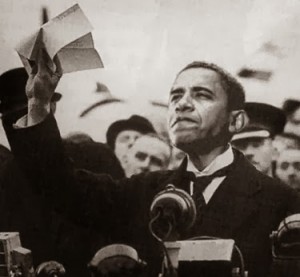 I’ve been saying for years, almost since the Jihadi War began, that the state of international relations gives me a “1930s vibe,” a feeling that we may be on a path toward another World War. That feeling has come and gone as the years passed, as I’m sure it did for those living in the 30s, but it’s never quite gone away. In fact, Russia’s predatory moves toward Ukraine have brought that feeling roaring back, the parallels being striking.

Bill Whittle has noticed the same trends and, in this video for Truth Revolt, compares a lion, a bear, and two lambs:

But it’s not Russia that worries me most, unless it’s in combination with other powers. Russia is a dying state, its demographic trends signalling serious future decline. Its military, outside of special elite units, just isn’t all that good, and, while they’ve made steps to rebuild, they’re still  a long way off. (They had trouble mobilizing the limited forces they used to assault Georgia in 2008.) Their economy is far too dependent on natural resources, especially oil, but Russian oil is notoriously expensive to extract. Fracking technology in the West promises to cut the legs out from under Putin and his successors as it drives the price of oil and gas down, making Russia’s less marketable.

China concerns me more: a rising power with a strong hyper-nationalist faction, an aggressive foreign policy, and a strong sense of (as Bill notes about Russia) historical grievance. Some incident in the South or East China Seas could easily be the spark for a major conflagration.

And then there’s Iran: a fascist theocracy that has promised to destroy Israel and is desperately seeking its own nuclear weapons to do just that.

We face a bear, a dragon, and a lion, while we are lead by lambs.

Yep. I have a bad feeling about this.

One Response to "(Video) Hitler and Chamberlain, Putin and Obama"