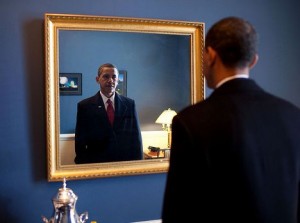 A plurality of voters think Barack Obama is the worst president since World War II, a new poll says.

According to a Quinnipiac University poll released Wednesday, 33 percent of voters think the current president is the worst since 1945.

Obama’s predecessor, former President George W. Bush, came in at second-worst with 28 percent, and Richard Nixon was in third place with 13 percent of the vote. After Jimmy Carter, who 8 percent of voters said was the worst president in the time period, no other president received more than 3 percent.

And if you think that was the worst of the polling news the Obama administration woke up to this morning, wait til you read this:

Americans are also expressing some buyer’s remorse after the 2012 election, according to the poll: 45 percent believe the country would be better off under Republican candidate Mitt Romney, versus the 38 percent who think it would be worse.

Well, it’s bad enough to rank worse than the man your party has by and large proclaimed to be the “worst, most evil President EVAH!!!!!!!” but when you also find out on the same day that nearly 50% of the American people think the country would be more better off  than not under your last opponent  … well then it’s time to take a long hard look at the man in the mirror to try and determine where it all went wrong – and then contemplate how to try and “right” the course.  Not that that will happen, mind you, because Obama thinks he can do no wrong.  All the same,  just a little friendly advice from yours truly for our nation’s Chief Executive Officer …

4 Responses to "Poll: Plurality believe Obama is the worst president since WWII"