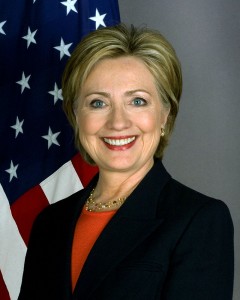 Yes, my friends, it’s time once again for one of our favorite games, “If it had been a Republican…”

Remember, how, back in the 2012 campaign, the press and the Democrat support groups (redundant, I know) hounded Republican nominee Mitt Romney over supposed misstatements and gaffes while on a foreign tour? I can recall one incident in particular, when Romney was in Poland and his campaign wanted to deal US foreign policy issues, a reporter chased after him shouting “What about your gaffes??” The purpose, of course, was to plant the idea with the public that Mitt’s minor faux pas showed he wasn’t qualified to be president.

In which case, I eagerly await Hillary being pestered about her foot-in-mouth moments:

The former Secretary of State, who’s been heavily promoting her new book “Hard Choices” in a likely precursor to running for president in 2016, appeared to state the Conservative and Tory Parties in Britain were rival political parties during a BBC interview.

“Tory” is in fact another name for the Conservative Party in Britain.

Asked by the host what she thought of the “Special Relationship” between the U.S. and Great Britain, Clinton declared it was “very special between our countries.”

“There’s not just a common language, but a common set of values that we can fall back on,” she said. “It doesn’t matter in our country whether it’s a Republican or a Democrat or frankly, in your country, whether it’s a Conservative or a Tory. There is a level of trust and understanding. That doesn’t mean we always agree because, of course, we don’t.”

As the article points out, Hillary was our Secretary of State, who had to deal with our close allies in the UK on a nearly daily basis, and yet she didn’t know “Tory” and “Conservative” were synonyms? It reminds me of the recent Obama ambassadorial appointee who didn’t know his soon-to-be host country, Norway, has a king and not a president.

For supposedly being so much smarter than everyone else and for all their claiming to know what’s best for us, progressives sure are ignorant of the wider world, no?

Of course, it could easily have been a simple slip of the tongue on Hillary’s part, saying “Conservative and Tory” when she meant “Conservative and Labor,” the kind of mental backfire we’re all subject to from time to time.

But not all of us are (probably) running for president, an office that has almost sole control over US foreign affairs, including relations with one of our closest allies.

And so I expect the MSM to grill Hillary mercilessly over this gaffe, hounding her incessantly with questions about her competence and knowledge

Just as soon as she becomes a Republican.

5 Responses to "What about *your* gaffes, Hillary?"