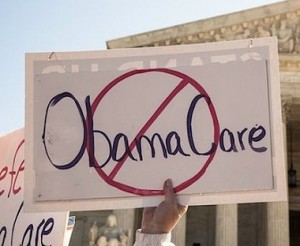 The Hill reports that the pressure is on for the White House on whether or not to delay the employer mandate for the third time:

The White House needs to make a decision soon on whether ObamaCare’s controversial employer mandate will take effect in 2015.

With the mandate set to take effect in January, businesses are awaiting final world from the administration on whether they will be required to track and report how many of their employees are receiving coverage.

Federal officials are late in delivering the final forms and technical guidance necessary for firms to comply, raising suspicions that the mandate could once again be delayed.

The mandate has been pushed back twice before, both times in late summer.

The delays to the mandate have angered House Republicans, who are now taking President Obama to court for what they say is his refusal to follow the letter of the law.

Another delay to the mandate would be sure to create a political firestorm and draw charges that the administration is playing politics with ObamaCare ahead of the midterm elections.

But support for the mandate on the left has begun to soften in recent months, with influential figures and former Obama administration officials questioning whether it’s needed to make the law work.

Seven business lobbyists interviewed by The Hill said it is unlikely the administration will defer the employer mandate wholesale one more time, given the intense political pressure from Republicans.

But many groups are expecting partial relief to be announced prior to November, perhaps in the form of looser reporting requirements that would be easier to follow.

“I’d be shocked if they did another [full] delay … but it wouldn’t surprise me if something else came out before the election,” said one source who requested anonymity in order to speak freely.

I wouldn’t be shocked one bit, considering their past history of delaying the more controversial parts of this bill they know will hurt them more in the voting booth than any other.  But, as they say, stay tuned.

One Response to "Will the #Obamacare employer mandate be delayed again?"