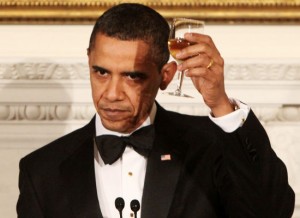 Our celebrity President held a couple of high-dollar fundraisers on the left coast this week – and the mainstream media are not happy that they weren’t granted access whatsoever to either of them (via):

Tuesday, the reporters and photographers traveling with the president on Air Force One and in his motorcade were left on the gravel path not even within sight of former Costco CEO Jim Sinegal’s house in the Seattle suburbs where Obama sat for a Senate Majority PAC fundraiser with a $25,000 entrance fee.

Wednesday morning, when he met with big donors for the House Majority PAC at the Four Seasons hotel in downtown San Francisco, they weren’t even told what room or floor he was on.

“We think these fundraisers ought to be open to at least some scrutiny, because the president’s participation in them is fundamentally public in nature,” said Christi Parsons, the new president of the White House Correspondents’ Association. “Denying access to him in that setting undermines the public’s ability to independently monitor and see what its government is doing. It’s of special concern as these events and the donors they attract become more influential in the political process.”

Despite constant complaints from the press corps and promises from White House officials, access to the president continues to be limited. The constantly repeated line that they’re running the “most transparent administration in history” tends to prompt snickers. Halfway through Obama’s West Coast swing, it’s tipping toward outrage.

Make sure to read the whole thing as Politico writes about other events that the press were only allowed very limited access to, and notes two meetings with high profile Democrats that the media only found out after the fact.

This is nothing new. In fact, the secretive nature of this administration is so absurd that they have actually blocked reporters from covering meetings about … transparency!  So it’s about freaking time someone in the mainstream media got outraged.  Bring on the chorus of frustrated journalists. Let’s hear more about it!

“Transparency” you can believe in – only it’s the kind of  phony”transparency” that I described here….

2 Responses to "Headline of the day: ‘Barack Obama locks out the press — again’"