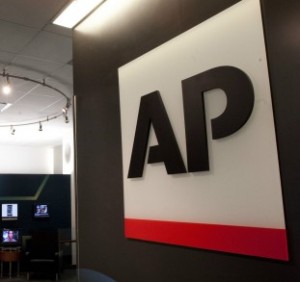 A disturbing, revealing tweet from the Associated Press earlier this morning (screen-capped in case they delete it):

As you’ll see below in the original piece published by the AP and written by journalist Bradley Klapper, this wasn’t just a headline writer gone wild. It was in the actual piece as well, the first two lines:

I’m not sure how long the article stayed up this way, but someone got a hold of it and revised it (even though as of this writing, the tweet is still there in all its infamy), and it now reads:

WASHINGTON (AP) — As the war in Gaza escalates, U.S. lawmakers are pressing the Obama administration to take no action that puts pressure on Israel to halt its military campaign against Hamas.

It’s fascinating, really, when you think about it – even the revised version is biased. Where the original article implied the Palestinians were being unfairly and horrifically targeted by IDF and ganged up on by US politicians who were “falling all over themselves” to support Israel, the revised version insinuates that Israel started the “military campaign” against Hamas without provocation. Ignored throughout the piece is the real horror behind the Gaza war, and not just this one but many prior: Palestinian children are taught from birth to loathe the Jewish people. And as soon as they’re able to hold a gun, the children are militarily trained on how to target and kill Jews. Not much later than that in their young lives, they’re instructed about martyrdom and how it is an “honor” to blow yourself up “for the cause.” Also not mentioned in Klapper’s hit piece is how Hamas routinely uses children and other innocents as human shields in their battles against Israel, how they deliberately store weapons they want to use against Israel near hospitals and schools so Israel looks like they bad guy when they destroy those weapons of war and innocents get caught in the crossfire.

I could go on, but you get the picture. Sadly, this isn’t just standard operating procedure for the Associated Press, but other news orgs as well, like Reuters and the BBC, all of which are seemingly incapable of putting their “#FreePalestine!” bias aside in favor of straight news reporting on a very delicate and dangerous subject. I’d like to think the light shined on the Associated Press today on the glaringly obvious bias in Klapper’s article will cause them and other news outlets to be a little more careful in the future when it comes to how they word their reports on the conflict in Gaza, but I won’t hold my breath. Israel-shaming is popular today, and – unfortunately – not just in media circles.

And besides, Hamas is just a “humanitarian organization“, right?