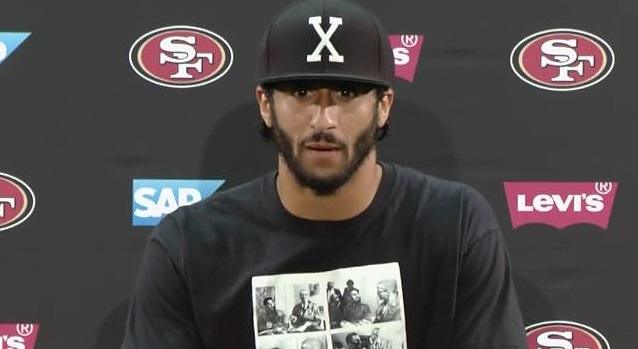 Much has been written in the aftermath of San Francisco quarterback Colin Kaepernick’s highly controversial decision to sit during the national anthem prior to the start of all 2016 pre-season games, mostly notably last week’s 49ers game against the Green Bay Packers at Levi’s Stadium. Most commentary has revolved around Kaepernick’s “right” to speak his mind but, with all due respect, the national conversation is missing the point.

The issue isn’t whether or not Kaep has “the right” to state his opinions. Of course he does. If someone from the government tried to shut him up by force, then, yeah, that person would be threatening the quarterback’s 1st Amendment rights. But no one from the government is trying to make him be quiet. What the issue at hand is is whether or not what did – which many view as disrespecting the American flag – was right to do, and if he chose the appropriate vehicle with which to express himself.

Kaep’s protest – over what he sees as widespread injustice against the black community – is being favorably compared to notable sports figures like boxer Muhammad Ali, and Olympians John Carlos and Tommie Smith, who all engaged in controversial protest practices during their time. But this is 2016, not the 1960s. Back then, the ways to garner national attention were much more limited, so you really had to work hard at standing out. These days you have the Internet, blogs, social media, 24-hour news and sports channels. There are an endless numbers of mediums for you to use in order now to get your point across nationally in ways that build bridges rather than destroying them.

This doesn’t foster constructive dialogue, either:

If he’s got family and friends who wear the blue uniform to protect and serve, then it was doubly unwise for him to wear those socks. They paint all officers with the same broad brush without distinguishing which ones are the bad ones and which ones are doing their jobs honorably. Lumping in the good officers with abusive ones is extraordinarily dangerous and indirectly inspires cop killers like Micah Johnson to take matters into their own hands. Does Kaep have even the tiniest of clues what he’s doing? It sure doesn’t sound like it.

Look, I’ll be the first to say he shouldn’t be made by his team or anyone else to stand. I also understand you need to make some noise, be unorthodox in order to shake things up sometimes. I just don’t think dissing the American flag and making “cops are pigs” fashion statements are the best ways to go about it. As a former flamethrower who could cut a verbal rug with the best of them, trust me when I say that the old saying about catching more flies with honey than vinegar applies here. More people will talk to you, will be willing to consider your viewpoint if you treat them with respect. In this case, Kaepernick disrespected his country with his ill-advised political stunt. Seattle QB Russell Wilson said it best:

First of all, there’s no perfect answer. I understand and respect the cause because there’s so much going on in America right now — so much hurt, so much pain. And ultimately I understand what he’s doing. For me, I love the flag. I love the National Anthem because it’s an emotional time for me because I’m so grateful I get to play on the football field. And every time I get to put my hand on my heart, it’s truly an honor — you know, the military, for me I think about my family members who have served, and friends — I train down in San Diego all the time, so I’m around the Navy and I see those guys around. And all they do for our country and the people in Afghanistan and all these people fighting. 9/11, for example, coming up — that’s going to be our first game and I think about all the pain from that. So that’s why I stand and put my hand on my heart.

Wilson understands that standing and putting your hand on your heart during the national anthem and showing pride in the American flag is not an endorsement of police brutality and injustice but instead honors and thanks those past and present who have made sacrifices – and in far too many cases, the ultimate sacrifice – for the many freedoms we get to enjoy today. Kaepernick’s issue is with the police, not the military, and not America, really. So he should spend more time in his community, in his city, fighting against the problems he sees, and less time starting fires he’s unable to put out.

Oh, and the next time he wants to preach about the merits of freedom from oppression, he might want to avoid wearing Fidel Castro t-shirts. Just sayin’.