(Note: Please remember that CNN will be rebroadcasting its coverage of 9-11 as it happened all day Monday, both on TV and the I’net.)

Imagine you are 29 years old. You’ve been married for six weeks to your college sweetheart, someone whom friends would later say that you wouldn’t have been “complete” without. You’re beginning to realize your personal and professional dreams. The world looks to be your oyster, and you believe that you and your spouse have the rest of your lives to explore it, all the while enjoying the comfort of knowing that you have not only each other, but the enduring love of family and friends surrounding you.

And then imagine those hopes being snatched away from you in the blink of an eye, without warning, without provocation. Imagine the chilling, horrifying realization that you will never see your spouse again, your family, your friends. That you will be leaving this earth much sooner than you ever thought you would be.

Such was the case for Peter Edward Mardikian, one of 2,996 victims of the September 11, 2001 terrorist attacks on our nation.

As it was for most of us, September 11, 2001 started off as an average day for Mr. Mardikian. Peter worked for a company called “Imagine Software” in Manhattan. 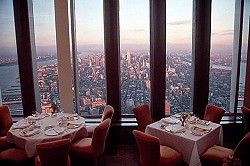 That morning Peter was on business, preparing a software exhibit for a trade show in the World Trade Center at Windows on The World, which was a popular restaurant on the top floor of the North Tower. As you can see from the picture, it had a spectacular view of the city. It was a city Peter Mardikian, who grew up in Princeton, NJ, had dreamed of living and working in. Here is what the morning started out like at Windows on the World:

Doris Eng’s greeting was particularly sunny, like the day, as Liz Thompson arrived for breakfast atop the tallest building in the city, Ms. Thompson remembers thinking. Perhaps Ms. Eng had matched her mood to the glorious weather, the rich blue September sky that filled every window. Or perhaps it was the company.

Familiar faces occupied many of the tables in Wild Blue, the intimate aerie to Windows that Ms. Eng helped manage, according to two people who ate there that morning. As much as any one place, that single room captured the sweep of humanity who worked and played at the trade center.

Ms. Thompson, executive director of the Lower Manhattan Cultural Council, was eating with Geoffrey Wharton, an executive with Silverstein Properties, which had just leased the towers. At the next table sat Michael Nestor, the deputy inspector general of the Port Authority of New York and New Jersey, and one of his investigators, Richard Tierney.

At a third table were six stockbrokers, several of whom came every Tuesday. Ms. Eng had a treat for one of them, Emeric Harvey. The night before, one of the restaurant’s managers, Jules Roinnel, gave Ms. Eng two impossibly-hard-to-get tickets to “The Producers.” Mr. Roinnel says he asked Ms. Eng to give them to Mr. Harvey.

Sitting by himself at a window table overlooking the Statue of Liberty was a relative newcomer, Neil D. Levin, the executive director of the Port Authority. He had never joined them for breakfast before. But his secretary requested a table days earlier and now he sat waiting for a banker friend, said Mr. Levin’s wife, Christy Ferer.

Every other minute or so, a waiter, Jan Maciejewski, swept through the room, refilling coffee cups and taking orders, Mr. Nestor recalls. Mr. Maciejewski was one of several restaurant workers on the 107th floor. Most of the 72 Windows employees were on the 106th floor, where Risk Waters Group was holding a conference on information technology.

Already 87 people had arrived, including top executives from Merrill Lynch and UBS Warburg, according to the conference sponsors. Many were enjoying coffee and sliced smoked salmon in the restaurant’s ballroom. Some exhibitors were already tending to their booths, set up in the Horizon Suite just across the hallway.

Down in the lobby, 107 floors below, an assistant to Mr. Levin waited for his breakfast guest. But when the guest arrived, he and Mr. Levin’s aide luckily boarded the wrong elevator, Ms. Ferer would learn, and so they had to return to the lobby to wait for another one.

Upstairs, Mr. Levin read his newspaper, Mr. Nestor recalled. He and Mr. Tierney were a little curious to see whom Mr. Levin, their boss, was meeting for breakfast. But Mr. Nestor had a meeting downstairs, so they headed for the elevators, stopping at Mr. Levin’s table to say goodbye. Behind them came Ms. Thompson and Mr. Wharton. Mr. Nestor held the elevator, so they hopped in quickly, Ms. Thompson recalled.

Then the doors closed and the last people ever to leave Windows on the World began their descent. It was 8:44 a.m.

At 8:46 a.m. American Airlines Flight 11 slammed into the North Tower, slicing through floors 94 through 98. Those in the direct path of the Boeing 767 aircraft that had been used as a weapon were likely killed instantly. No one in the floors above floor 91 would survive, because they had no way out, and firefighters could not reach them.

According to Peter Mardikian’s wife Corine, he called her at 9:05 a.m. using a landline phone, one that was miraculously still working, on the 106th floor. Here is her recollection of the conversation:

“He said it was very, very smoky,” Ms. Mardikian said, “and he was worried about his breathing. He was talking about going up to the roof. I think he was trying to shelter me. He said he couldn’t talk longer because there were a lot of people standing in line to use the phone.”

His in-laws quoted him as saying this as well to his wife:

“We think a bomb hit here. I’m having a hard time breathing. I probably won’t make it out of here. I just want you to know I love you.”

Here’s what was happening on the top floors of the North Tower at 9:35 that morning:

So urgent was the need for air that people piled four and five high in window after window, their upper bodies hanging out, 1,300 feet above the ground.

They were in an unforgiving place.

Elsewhere, two men, one of them shirtless, stood on the windowsills, leaning their bodies so far outside that they could peer around a big intervening column and see each other, an analysis of photographs and videos reveals.

On the 103rd floor, a man stared straight out a broken window toward the northwest, bracing himself against a window frame with one hand. He wrapped his other arm around a woman, seemingly to keep her from tumbling to the ground.

Behind the unbroken windows, the desperate had assembled. “About five floors from the top you have about 50 people with their faces pressed against the window trying to breathe,” a police officer in a helicopter reported.

Now it was unmistakable. The office of Cantor Fitzgerald, and just above it, Windows on the World, would become the landmark for this doomed moment. Nearly 900 would die on floors 101 through 107.

In the restaurant, at least 70 people crowded near office windows at the northwest corner of the 106th floor, according to accounts they gave relatives and co-workers. “Everywhere else is smoked out,” Stuart Lee, a Data Synapse vice president, e-mailed his office in Greenwich Village. “Currently an argument going on as whether we should break a window,” Mr. Lee continued a few moments later. “Consensus is no for the time being.”

Soon, though, a dozen people appeared through broken windows along the west face of the restaurant. Mr. Vogt, the general manager of Windows, said he could see them from the ground, silhouetted against the gray smoke that billowed out from his own office and others.

By now, the videotapes show, fires were rampaging through the impact floors, darting across the north face of the tower. Coils of smoke lashed the people braced around the broken windows.

In the northwest conference room on the 104th floor, Andrew Rosenblum and 50 other people temporarily managed to ward off the smoke and heat by plugging vents with jackets. “We smashed the computers into the windows to get some air,” Mr. Rosenblum reported by cellphone to his golf partner, Barry Kornblum.

But there was no hiding.

As people began falling from above the conference room, Mr. Rosenblum broke his preternatural calm, his wife, Jill, recalled. In the midst of speaking to her, he suddenly interjected, without elaboration, “Oh my God.”

Imagine what it would feel like to be Peter Mardikian in that crowd, knowing that each moment may be your last. What would you think? How would you feel? How would you act?

The North Tower collapsed at 10:28 that morning. Collapsing along with it were the lives of everyone in floors 92 and above, including Peter Mardikian.

Destroyed with it were the hopes and dreams of everyone on those floors who were murdered that day in an act of extraordinary cruelty and viciousness perpetrated by Islamofascists in an act of war against America.

Mr. Mardikian’s life was snatched from him in a way that no one should ever have to experience. He will never get to feel sunlight on his face again, nor get a kiss from his wife after he’s come home from a hard day at the office. Any plans they’d made for the future? Gone.

A September 11 Memorial Endowment was established by Ohio State University in 2002 in honor of Peter Mardikian, who was an alumnus – graduating from OSU’s Fisher College of Business in 1995 with a B.A. in marketing and business. It’s also where he met the woman who would be his wife.

The online guestbook for Peter Mardikian has five pages of messages from family, friends, and strangers – their lives all touched by either knowing and loving Peter Mardikian or learning about him after Sept. 11.

At some point in your day, please say a prayer or a kind word for Mr. Mardikian’s family, as well as all other families who lost loved ones that day. They may be gone, but they are most definitely not forgotten.

Thanks to D.C. Roe for coordinating the 9-11 victims tribute. Click below to read other tributes to 9-11 victims:

Update: Malkin has posted her tribute to 9-11 victim Giovanna Porras, who worked for General Telecom. If you have a tribute as well, please trackback to this post or email me with yours and I will add the link to this post.

—Uncommon Sense remembers Maureen L. Olson, business librarian for Marsh, Inc. and has links to more tributes, as has ST reader benning, who has posted his tribute to Gary H. Lee, who worked for Cantor Fitzgerald as vice president of telecommunications.

— Here in the Hills remembers Bill Hunt, who worked for Eurobrokers, with a touching photo montage.

— Musing Minds helps us get to know Paul Pansini, a FDNY Engine 10 firefighter

— Captain Ed has a nice post up on Ysidro Hidalgo-Tejada, who worked in food prep. at Windows on the World

— Sabra at Stilettos in the Sand writes about Yvette Nicole Moreno, receptionist for Carr Futures

— LaShawn Barber blogs about “A Religious and Unconventional War”

— Lorie Byrd at Wizbang links up to articles past and present that have thoughtfully reflected on 9-11.