I blogged last night about Missouri’s proposed Amendment 2, and wanted to do so again today because what I’ve read about it has really been weighing on me. I’ve had a chance to research it some more since my last post, and after doing so, I have no doubt in my mind that those who have asserted that A2 is a pro-cloning bill are 100% correct.

The Missouri Stem Cell Research and Cures Initiative, proposed by a coalition of patient and medical organizations, would amend the state constitution to ensure that any stem cell research and treatments allowed under federal law will continue to be allowed in Missouri.

But Amendment 2 is a fraud being committed on Missourians. It claims to ban “cloning” but it provides it’s own definition for cloning in which to “ban” (emphasis added):

(1) No person may clone or attempt to clone a human being.

You wouldn’t know the (2) above if you looked at the “fair ballot language” for the bill on the Missouri Sec. of State’s website:

A “yes” vote will amend the Missouri Constitution to allow and set limitations on stem cell research, therapies, and cures which will:

This measure will have no impact on taxes.

Those in favor of this bill will point out #1 above to try and prove to those who oppose it on cloning grounds that it won’t allow cloning. What they don’t tell you is that their definition of cloning (which is actually at the bottom of the amendment in a list of definitions for what terms in the meat of the bill mean) defines cloning as the creation of another human being, not the creation of an embryo for purposes of destroying it. To repeat: There is nothing in the bill that bans the cloning of an embryo for the purposes of destroying it. In other words, this is a pro cloning bill. NRO’s conclusion, which I posted last night, was right on:

If I remember correctly, Missourians oppose cloning by a ratio of like 9-1. They wouldn’t support this bill if they knew what the fine print really said. 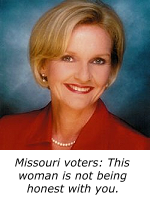 THIS is why Senator Jim Talent opposes Amendment 2 and why demagogues like Claire McCaskill try to claim he “doesn’t support cures” and also why McCaskill was all too happy to let Parkinson’s disease sufferer Michael J. Fox essentially assert the same thing. It’s sickening how the wool is being pulled over the eyes of people in Missouri over this complicated issue that deserves honest debate, not cheap political demagoguery for votes. Proponents of of this amendment are trying to write into the Missouri constitution something that states that the Missouri legislature would never be allowed to ban or criminalize any types of stem cell research, including embryonic stem cell research that involves the cloning of and destroying of embryos.

This is the can of worms that McCaskill and other embryonic stem cell research proponents have opened with their misleading advocacy of it and painting of others who are against it as being “against cures for Parkinsons” etc, and once that can is opened it can’t be closed. What pro-stem cell advocates in MO are counting on is the ignorance of the voter in not knowing the specifics of what the amendment states. They think because they can tell people that the first part of the amendment says “No person may clone or attempt to clone a human being” that that means no cloning will be permitted. That is a lie. Cloning WOULD be permitted under this law, you would just clone the embryo in order to destroy it, rather than implant it into a woman’s uterus to create a human being.

The biotechnology legal team that helped the pro-stem cell advocacy crowd in MO write this amendment really are disgusting, underhanded individuals, and I think what they are trying to do in MO is borderline criminal. We are talking about creating embryos specifically to destroy them. It’s freaking sick, it’s morally and ethically wrong and if this amendment passes in MO, I will put the blame squarely at the feet of the dishonest liars who knowingly pushed forth an amendment that they deceived the people of Missouri about. If I lived in MO, I’d be on the frontlines of this battle, and so should ANYONE who does not support cloning, no matter whether they are on the left or the right side of the aisle.

The left have gone too far with this. If they have to count on the ignorance of the voter in order to get something passed then you know there’s something wrong with what they’re advocating. It’s why they want to stifle the debate on this issue (along with many others). They know if all the facts – rather than impassioned emotional rhetoric -were out there about what A2 was really about, they wouldnt’ have a chance in hell of getting it passed. So they have to lie not only about the bill, but opposition to it. It’s a classic lefty tactic: paint yourself as the savior and defender of the sick, while painting your opposition as someone who doesn’t care if the sick people die.

If the left didn’t have “victims” to use with which to advance their underhanded agendas, their party would cease to exist in its current form.

If you’re a Missouri voter, vote NO on Amendment 2. Because if you oppose cloning, you oppose Amendment 2. Send a message to Claire McCaskill, and other embryonic stem cell research demagogues: you won’t take being lied to lying down.

And while you’re at it, vote to re-elect Senator Jim Talent, who is currently leading McCaskill in the polls by only two points. He’s standing on principle on this issue. Claire McCaskill is only doing what it takes to get elected, including being deliberately deceptive and dishonest about issues important to Missourians.

Update: In related news, Michael Steele has responded to the Maryland MJ Fox stem cell research ad Ben Cardin is running with an ad of his own that makes Cardin look about two feet tall. Watch it here and read more commentary about the ad here.

21 Responses to "Another look at Missouri’s proposed Amendment 2: It’s a fraud"