He’s been nominated for the Nobel Peace Prize. He was a “hot ticket” recently in Canada. CBS Early Show anchor Harry Smith wondered aloud a few weeks ago if Gore should be considered a “prophet.” And today, the WaPo posted an unnewsworthy piece on Al Gore – on the front page – that describes him as a “rock star.”

Could the mediots possibly slobber over this guy any more?

Well, yes, if he wins a Best Documentary Oscar tonight for “An Inconvenient Truth”, expect a statue to be erected in his honor somewhere close by the “gw doomsday vault” – scaling down his ego to fit might make building the statue there a problem, though. 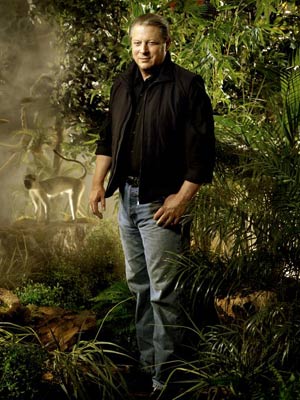 For what it’s worth, here is a complete list of nominees (scroll) in the Best Documentary feature category, which reads like a left wing “must watch” list:

The pre-Oscar love fest has been joined by none other than Jimmy “give Hamas a chance” Carter. Watch him speak lovingly of Gore here.

Although he does have some competition from some other left wing ‘talent,’ I predict a Gore win, for the same reasons I believe the Chicks won 5 Grammy awards a few weeks ago. Because who votes on the winners? None other than the famously Nutrootian Hollyweird left. And it doesn’t get much more Nutrooty than Al Gore.

Update: Allah’s providing a running commentary of the Oscars here and notes that the “Goracle” adulation started early on.

Mon AM Update I: Here’s a shocker: Gore & co. win and the Gorgasms continue. 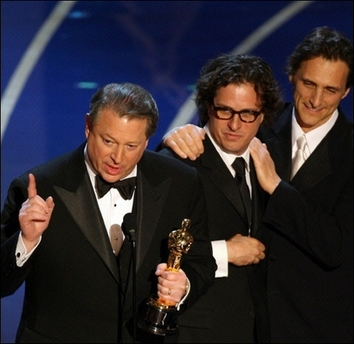 Mon AM Update II: Here’s video of the ‘big moment’: