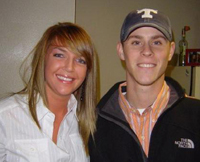 Imagine this: A young black couple in Knoxville, TN go out for a night on the town, but instead are viciously murdered – their bodies mutilated and burned, after being brutally gang raped, sodomized, and tortured at the hands of five white thugs. The story easily makes it onto the front page of the national news, right? For weeks, we hear of little else outside of the manhunt that takes place for the suspected perps. Pictures of the perps are shown on national TV, and the mediots play up the racial angle of the crime, which leads to commentary from purveyors of ‘social justice’ exclaiming that the white suspects are guilty of what ‘all’ white people are guilty of, and that’s ‘hating black people’, in this case, to the extreme.

Such a crime did in fact occur, but reverse the races: the perps were black, and the victims were Channon Christian and Christopher Newsom, pictured above. What happened to Christian and Newsom? Wikipedia has a definitive well-sourced entry on their murders (the footnotes in the story are found at the bottom of the Wiki page):

Hugh Christopher Newsom, Jr., 23, and Channon Gail Christian, 21, were a couple from Knoxville, Tennessee. They were tortured, gang-raped, and murdered after being kidnapped early on the morning of January 7, 2007, while their vehicle was being carjacked.[1] Both murders have been classified as premeditated.[2]

Five suspects have been arrested and charged in the case.[3] The grand jury has indicted the 5 suspects with a total of 46 counts including torture, murder, and rape.[2]

Christian and Newsom had gone on a date at a local restaurant on Saturday, January 6, 2007, but did not return home. During their drive, the couple was “hijacked, bound and blindfolded and taken back to Davidson’s apartment.”[4]

At Davidson’s apartment, Newsom had apparently been gang-raped in Channon’s presence. Some reports state that his penis had been severed from his body prior to his death.[4] This has not been confirmed.[5] According to Officer Todd Childress, “Newsom’s body was wrapped in a ‘sheet and/or comforter,’ and that the victim had been shot at least three times. He also notes that Newsom’s shoes, socks, identification, and iPod were missing. His body had been burned.”[6]

Christian’s parents found her Toyota 4-Runner on Chipman Street on Monday, with the help of her mobile phone provider. Because the killers ditched Christian’s SUV just a few hours after it was stolen, it has been sugested that the primary objectives of the perpetrators was their desire to kidnap, torture, rape, and murder, instead of a simple hijacking.[7] An envelope recovered from the vehicle yielded fingerprint evidence that led police to Lemaricus Davidson and 2316 Chipman Street. When police went to the address on Tuesday, January 9, they found the home unoccupied and Christian’s body in a trash can in the kitchen. She had been dismembered, her body found in five separate trash bags.[8] It has been alleged that for two days she had been gang-raped multiple times, vaginally, anally, and orally, and beaten and urinated upon. Reports have also indicated that Christian was forced to drink bleach or a similar liquid, in an attempt to remove DNA evidence. Some reports also state that her breasts had been cut from her body, prior to her death.[4] This has not been confirmed.[6] Newsom’s body was found adjacent to railroad tracks in East Knoxville the next afternoon.[4]

This case is very similar to a series of murders that happened in the winter of 2003 in Wichita, KS:

The Wichita Massacre, also known as The Wichita Horror[1], was a murder/assault/rape/robbery spree perpetrated by two African American brothers in the city of Wichita, Kansas in the winter of 2000. The gruesome crimes shocked Wichitans, and purchases of guns, locks, and home security systems subsequently skyrocketed in the city.[2]

The Carr brothers, 22-year-old Reginald and 20-year-old Jonathan, already had serious criminal records when they began their spree. On December 8, 2000, having recently arrived in Wichita, they committed armed robbery against 23-year-old assistant baseball coach Andrew Schreiber. Three days later, they shot and mortally wounded 55-year-old cellist and librarian Ann Walenta as she tried to escape from them in her car.

Their crime spree culminated on December 14, when they invaded a home and subjected five young men and women to robbery, sexual abuse, and murder. The brothers broke into a house chosen nearly at random where Brad Heyka, Heather Muller, Aaron Sander, Jason Befort and a young woman identified as “H.G.”, all in their twenties, were spending the night. Initially scouring the house for valuables, they forced their hostages to strip naked, bound and detained them, and subjected them to various forms of sexual humiliation, including rape and sodomy. They also forced the men to engage in sexual acts with the women, and the women with each other. They then drove the victims to ATMs to empty their bank accounts, before finally bringing them to a snowy deserted football field and shooting them execution-style in the backs of their heads, leaving them for dead. The Carr brothers then drove Befort’s truck over the bodies.

They returned to the house to ransack it for more valuables. It was then they claimed their final victim, Nikki, H.G.’s muzzled dog who was beaten and stabbed to death.

The lack of adequate media coverage on these crimes is a prime example of why the media is called the liberal media. It is done so for a reason. Why? Because the media, which is comprised mainly of so-called ‘progressives’, doesn’t relish exploiting a crime most of the time unless the victim(s) involved are minorities assaulted and/or murdered by the ‘privileged” white man. As we learned from the Duke lacrosse case, all it takes are allegations – not convictions – for the media to make judgement calls as to the guilt or innocence of the accused.

Liberal media activism can also be seen on the reporting of two murders which happened in Laramie, Wyoming in the late 1990s. Of course, by now we know about Matthew Shepard, whose 1998 murder sparked a swarm of media attention due to the belief that the murder was committed because Shepard was gay. The national attention surrounding Shepard’s murder fueled the pro-hate crimes legislation crowd’s agenda to get hate crimes legislation passed on local levels as well as national. Details emerged years later essentially debunking the ‘he was murdered because he was gay’ myth. He was murdered by two thugs on a drug binge, and he knew at least one of the thugs prior to the night of his murder:

Former Laramie Police Detective Ben Fritzen, one of the lead investigators in the case, also believed robbery was the primary motive. “Matthew Shepard’s sexual preference or sexual orientation certainly wasn’t the motive in the homicide,” he said.

“If it wasn’t Shepard, they would have found another easy target. What it came down to really is drugs and money and two punks that were out looking for it,” Fritzen said.

[Prosecutor] Rerucha attributes McKinney’s rage and his savage beating of Shepard to his drug abuse. “The methamphetamine just fueled to this point where there was no control. It was a horrible, horrible, horrible murder. It was a murder that was once again driven by drugs,” Rerucha said.

Shepard’s killers rec’d life sentences without the possibility of parole – their lives were spared by Shepard’s parents, who don’t believe in the death penalty. [Update: See a slight clarification in the comments section regarding their sentences via ST reader Dana Pico.]

But while the media were falling all over themselves over the murder of Matthew Shepard, they were nowhere to be found just a year prior when another Laramie resident, 15 year old Daphne Sulk, was stabbed 17 times and murdered by her 38 year old ‘boyfriend’ Kevin Robinson, who killed her because she refused to have an abortion. Robinson’s sentence? 22 years with the possibility for parole. Couldn’t this have been classified as a ‘hate’ crime (if, in fact, we must)? You had a white older man murdering an underage girl … oh wait, she was pregnant and refused to have an abortion, so this case didn’t warrant the usual cries from far left feminists (and their pals in the press) because she actually wanted to keep her baby.

The media’s dereliction of duty didn’t start with the Christian/Newsom murders nor, unfortunately, will it end with them because, just like Democrats, the media would rather sensationalize and side with groups of people that have historically been viewed as ‘helpless minorities’ rather than actually report the facts as they stand – without the spin. In the Democrats’ case, this type of shameless demagoguery oftentimes helps them win voters. In the media’s case, this type of sensationalistic advocacy journalism – like we saw in the Shepard case – oftentimes helps them win viewers and readers. Ironically, the one-sided nature of the media and Democrats over issues like this hurt the very people/problems they claim they want to ‘help.’

Meanwhile, other horrific crimes that happen get little to no coverage in the press because the victims either weren’t ‘fortunate’ enough to be a minority or taking a liberal position on an issue like abortion and/or weren’t ‘fortunate’ enough to have been brutalized by a white person. Not only is the media guilty of this, but so are many courts across the country, who, thanks to ‘hate crimes legislation’ advocates, have to view crimes which happen to minorities in a much harsher light than the same crimes which happen to non-minorities (white men). In essence, it’s like being victimized three times. Once by the perp(s) and again by both the media and the justice system.