And this time, it’s Canadians who are letting him hear it:

Michael Moore is handing out fake bandages to promote his new film Sicko, an exposÃ© of the failings of the U.S. health care system.

But he may feel like applying a couple to himself after the mauling he received yesterday from several Canadian journalists â€“ present company included â€“ following the film’s first viewing at the Cannes Film Festival.

“You Canadians! You used to be so funny!” an exasperated Moore said at a press conference in the Palais des Festivals.

“You gave us all our best comedians. When did you turn so dark?”

We Canucks were taking issue with the large liberties Sicko takes with the facts, with its lavish praise for Canada’s government-funded medicare system compared with America’s for-profit alternative.

While justifiably demonstrating the evils of an American system where dollars are the major determinant of the quality of medicare care a person receives, and where restoring a severed finger could cost an American $60,000 compared to nothing at all for a Canadian, Sicko makes it seem as if Canada’s socialized medicine is flawless and that Canadians are satisfied with the status quo.

Moore makes the eyebrow-raising assertion that Canadians live on average three years longer than Americans because of their superior health care system.

I suggested to Moore that Sicko makes Canada’s health system look so great, it wouldn’t be surprising if Prime Minister Stephen Harper â€“ of whom Moore is no fan â€“ handed out DVD copies of it as campaign material in a future election.

Other Canadian journalists spoke of the long wait times Canadians face for health care, much longer than the few minutes Moore suggests in Sicko. Moore, who has come under considerable fire for factual inaccuracies in his films, parried back with more questionable claims.

“You’re in a longer line than we’re in because you get to live three years longer than we do. Why is that?” Moore said. “Why is it that a baby born in Toronto has a better chance of making it to its first birthday than a baby born in Detroit?”

Moore later back-pedalled on some of his praise, saying neither Harper nor regular Canadians should pat themselves on the back too much.

His latest crockumentary was, incidentally, well-received at the Cannes film festival Saturday, which isn’t exactly surprising:

Moore is a Cannes favorite. His last film, the war-on-terror documentary “Fahrenheit 9/11” won the festivalâ€˜s top prize, the Palme dâ€˜Or, in 2004. “Sicko” is screening out of competition — Moore joked that he didnâ€˜t want to appear like a “typical American” by greedily seeking another trophy

Once again, as is the case with Jimmy Carter, I’m struck with the hypocrisy of it all. How much do you want to bet some of the same elites who routinely heap praise on the America-hating Bush-bashing Moore at Cannes in spite of his blatant disingenuousness would rather spit on than give the same benefit of the doubt to the Bush administration? 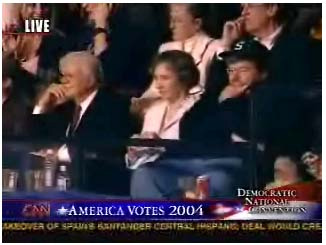 Michael Moore and Jimmy Carter:
Two peas in a pod.

On a related note, Don Surber examined Moore’s claim about the French healthcare system supposedly being the cat’s meow and found it lacking. Blue Crab Boulevard points to a Swedish study which challenges Moore’s claims about healthcare in both France AND the UK.

Interestingly enough Roger Friedman at Fox News thinks the movie shows Moore’s ‘maturity’ as a filmmaker. Hmmm. Well, if lying were one of the chief indicators of maturity, Friedman would be right on.

Update/Related: Canada might not be warming up to Sicko too much, but the same can’t be said for Al Gore’s movie An Inconvenient Truth, which has become ‘required watching’ for some schools there, so much so that one student has claimed that he’s been shown the movie in four different classes.