The former president turned full time meddler has once again lashed out against the President, in his harshest denounciation yet:

Former President Carter says President Bush’s administration is “the worst in history” in international relations, taking aim at the White House’s policy of pre-emptive war and its Middle East diplomacy.

The criticism from Carter, which a biographer says is unprecedented for the 39th president, also took aim at Bush’s environmental policies and the administration’s “quite disturbing” faith-based initiative funding.

“I think as far as the adverse impact on the nation around the world, this administration has been the worst in history,” Carter told the Arkansas Democrat-Gazette in a story that appeared in the newspaper’s Saturday editions. “The overt reversal of America’s basic values as expressed by previous administrations, including those of George H.W. Bush and Ronald Reagan and Richard Nixon and others, has been the most disturbing to me.”

He also took another shot (the prior one is here) at outgoing British Priminister Tony Blair: 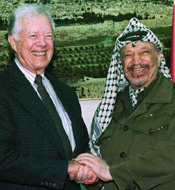 Isn’t it very telling that the same former president who routinely takes up for and makes excuses for Palestinian terrorists, including the Hamas terrorist organization – while trying to undermine the United States by bringing Cuba to the UN human rights table – doesn’t extend that same benefit of the doubt to his own country’s government?

This is the moral bankruptcy Jimmy Carter brings to the table every time he opens his mouth to denigrate the President while siding with the Jew-hating terrorists who comprise Hamas. Via extension, Carter, sadly, is representative of so many other modern day Democrats when it comes to denouncing this administration while downplaying the threats we face overseas, essentially saying that it’s President Bush who is the bigger threat than actual terrorists who want to kill us.

As far as the “worst administration in history” bit, I wonder if Carter happens to have a mirror handy for the next time he says that, especially considering the fact that not only does he continue to make excuses for terrorists but former officials in his own adminstration are doing the same thing?

30 Responses to "The moral bankruptcy of Jimmy Carter"