Echoing an insulting theme expressed by Rep. Charlie Rangel and Senator John Kerry, among other reprehensible Democrats, presidential hopeful John Edwards made a call yesterday for not only protesting the war on Memorial Day, but also for a “mandatory military service” requirement to take the ‘burden’ off the poor:

Edwards also called Monday for spreading the burden of serving the country by mandating national service.

“One of the things we ought to be thinking about is some level of mandatory service to our country, so that everybody in America — not just the poor kids who get sent to war — are serving this country,” he said.

In usual fashion, he tried to back track moments later:

After the event, Edwards said he had not meant to imply that only the poor go to war, only that everyone should serve in some way.

Please go back up and read what he said about the poor serving, just to see how big of a lie he uttered when he tried to ‘clarify’ his comments.

“We have people from all walks of life in America who are serving, including Reservists and National Guard,” he said. “What we want to do is to have all Americans to have a chance to serve their country.”

Um, don’t they already have that “chance”, Senator? 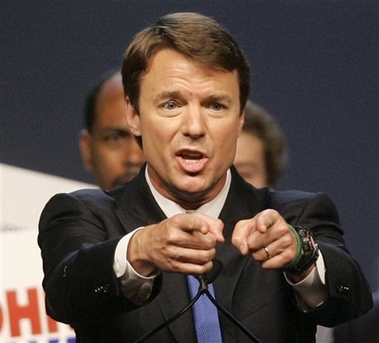