And the winner, er, loser, is: Cameron Diaz:

Actress Cameron Diaz appears to have committed a major fashion crime in Peru.

The voice of Princess Fiona in the animated Shrek films may have inadvertently offended Peruvians.

They suffered decades of violence from a Maoist guerrilla insurgency by touring there on Friday with a bag emblazoned with one of Mao Zedong’s favourite political slogans.

While she explored the Inca city of Machu Picchu high in Peru’s Andes, Diaz wore over her shoulder an olive green messenger bag emblazoned with a red star and the words ‘Serve the People’ printed in Chinese on the flap, perhaps Chinese Communist leader Mao’s most famous political slogan.

While the bags are marketed as trendy fashion accessories in some world capitals, the phrase has particular resonance in Peru.

The Maoist Shining Path insurgency took Peru to the edge of chaos in the 1980s and early 1990s with a campaign of massacres, assassinations and bombings.

Nearly 70,000 people were killed during the insurgency. 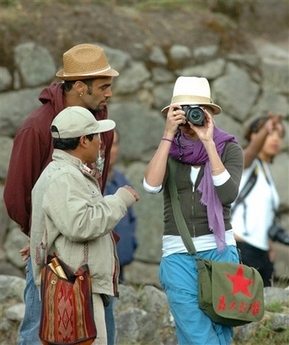 I’ll be interested to see what her explanation is – assuming she provides one. If she admits she knows what the bag symbolized, she comes of as looking ‘insensitive’ – not something you’d expect from the Hollywood ‘elite.’ Not only that, but it would beg the question: why on earth would you even buy the damn bag, let alone carry it anywhere … especially to Peru! If she claims she didn’t know what the bag meant, then she comes off looking like an really clueless.

Bottom line is that either Diaz was too stupid to know what her bag symbolized and was wearing it as a ‘fashion statement’ or she did know and carried it anyway in a show of defiance. Either way, this little incident proves that she’s even more stupid than I’d originally suspected she was.

Cameron Diaz decided to go wandering around Peru with a handbag imprinted with one of the slogans of Chairman Mao. The problem is that Maoist terrorists killed more than 50,000 people during an insurrection in Peru in the ’80s and ’90s. Naturally, the locals were more than a little irritated.

Of course, like most ce-lib-rities, Diaz has the brains of a three-week old kitten, so I’ll assume she had no clue about who or what Shining Path was.

8 Responses to "Clueless Hollyweirdo of the month"