There’s cronyism and there’s phoneyism, and as we all know by now, John Edwards ranks high on the list of biggest phoneys to ever run for political office. I’ve written about it here before on numerous occasions, and tonight, ST reader Dana Pico takes the hammer to the nail in this piece about how Edwards has made oodles and oodles of $$ off of things he rails against to the public. Dana referenced this article, written for MSN’s Money Central page by Tim Middleton. In it, Middleton lays out the facts:

Edwards is running as a populist, but profits on his stock investments alone would distance the candidate from the cause.

Edwards has raked in hundreds of thousands of dollars in capital gains from stock in Apple, BP PLC, Burlington Resources, Medtronic and Schlumberger, the chief rival to Halliburton, where Vice President Dick Cheney was once CEO.

Edwards generated most of his wealth as a trial lawyer, but last year his principal employment was as a senior adviser to Fortress Investment (FIG, news, msgs), a large hedge-fund operator, for which he received $479,512. His and his wife’s investment in Fortress Investment Fund III (Fund D) totaled between $1 million and $5 million.

As a presidential candidate, Edwards has lashed out at subprime lenders, saying they are “pulling a fast one on hardworking homeowners.”

Fortress Investment Fund III is based in the Cayman Islands. Edwards’ campaign said he opposes offshore tax havens and, “as president, he will end them.”

Edwards has said he worked for Fortress to learn more about financial markets and their link to poverty. He is the former director of the Center on Poverty, Work and Opportunity at the University of North Carolina in Chapel Hill.

He evidently learned a good deal because his portfolio is aggressive and slanted toward Wall Street’s most complex deals. He has accounts, including a trust for his children, with Atlantic Trust Private Wealth Management and Oak Hill Capital Partners Fund. Two investments, Drawbridge Global Macro Fund and Drawbridge Special Opportunities Fund, are Fortress hedge funds that specialize in what his disclosure form characterizes as “global markets, strategies and instruments.”

Nothing, absolutely nothing, represents Edwards’ penchant for willfully and deliberately deceiving the public about his supposedly ‘noble’ intentions towards the poor than that line he made about why he worked for Fortress referenced in Middleton’s piece. And just as a show of compassion for lazy far lefties who will demand, rather than look for, the “mainstream media article” that talks about this quote, here it is:

Democratic presidential candidate John Edwards said Tuesday that he worked for a hedge fund to learn more about financial markets and their relationship to poverty in the United States.

“It was primarily to learn, but making money was a good thing, too,” the 2004 vice presidential nominee said in an interview with The Associated Press.

“Primarly to learn”? “[w]orked for a hedge fund to learn more about financial markets and their relationship to poverty”? Right. And I’m the Secretary of Defense.

Edwards is trying his best now more than ever to pull the wool over everyone’s eyes about his motivations, but trust me, they are not noble, and they are definitely not altruistic, nor are they designed to really ‘help’ anyone – other than John Edwards, especially when you consider the following facts (in addition to the ones mentioned in Middleton’s write-up):

There is nothing this man will not say and/or do to get elected. If by some fluke he becomes president of this country, God help us.

Oh, and for any lefties reading this who believe I have developed a newfound dislike for ‘the rich’ – think again. This isn’t about class envy. Rich people have just as much right to contribute to worthy causes as anyone else. I don’t begrudge that. What I immensely dislike is John Edwards trying to present himself to the public as some selfless savior of the less fortunate. He is neither, contrary to the hysterical rantings of Edwards’ fanatical supporters like “RG.” 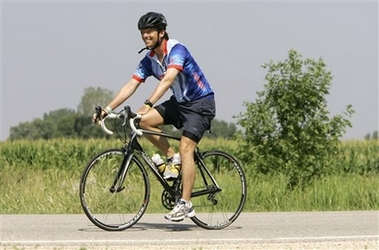 The term “spin cyle” takes on a whole new meaning with that picture, doesn’t it?