Not quite giving Obama a day to recover from his faux warmonger declarations before she pounced like a tiger on its prey, Dem presidential candidate frontrunner Hillary Clinton had this to say in response to recent ‘careless’ remarks Senator Obama has made about invading Pakistan – and using the nuclear option:

The leading Democratic candidates for president sparred with each other over the issue of nuclear weapons Thursday and the result was pure heat.

In another broadside indicating the increasingly heated race for the Democratic nomination, Sen. Hillary Clinton, D-N.Y., implied Thursday that comments made by Sen. Barack Obama, D-Ill., were careless and unpresidential.

Sen. Clinton was referring to Obama’s statement earlier in the day that he had ruled out using nuclear weapons against al Qaeda targets in Afghanistan or Pakistan.

Clinton also suggested Obama’s high-profile speech earlier in the week in which he said would be willing to invade Pakistan to attack high-profile al Qaeda targets, given actionable intelligence, was inappropriate, further evidence that she is painting her challenger as unprepared for the job of commander in chief.

Regarding terrorist targets in the Afghanistan/Pakistan region, Obama told The Associated Press Thursday: “I think it would be a profound mistake for us to use nuclear weapons in any circumstance.” He then added: “Involving civilians.”

Seeming to think twice about his response, Obama then said, “Let me scratch that. There’s been no discussion of nuclear weapons. That’s not on the table.”

Clinton, asked about his remarks Thursday afternoon, took issue with them.

More, from the article (emphasis added):

On Wednesday, Obama delivered a major anti-terrorism speech in which he essentially threatened the government of Pakistan that as president he would attack al Qaeda targets in the country with or without the permission of President Gen. Pervez Musharraf. “If we have actionable intelligence about high-value terrorist targets and President Musharraf will not act, we will,” Obama said.

Clinton did not take issue with that as an option, but suggested Obama should not have been delivering such messages publicly.

“I am concerned about talking about it,” she said. “I think everyone agrees that our goal should be to capture or kill bin Laden and his lieutenants but how we do it should not be telegraphed and discussed for obvious reasons.”

Strike 2, but with a contradiction.

If Hillary Clinton doesn’t think we should openly talk about how we’re going to capture and/or kill terrorists, where was she during the warrantless wiretap ‘scandal’ the NYT reported on using top secret information supplied by leakers? Where else? On the front lines, whining with the rest of the far left on how it was supposedly a violation of our Constitutional rights. There were no complaints from her that the leakers be held to account for revealing this national security information to the public, no chiding them that they shouldn’t have been talking about the program because it openly broadcasts to the enemy what we’re trying to do to catch them, in spite of the fact that intelligence officials testified that the leak hurt their ability to catch terrorists.

What Hillary’s told Obama to do here is: Hush – our enemies are watching, listening, and learning – and adapting, and we don’t need to help them. Exactly what conservatives have been saying about leak after leak after leak after leak that has come out in the papers about what our gov’t agencies are doing behind the scenes to try and prevent another terrorist attack. Of course, when WE say it, we’re “trying to stifle the free speech of others, questioning their patriotism, covering for the Bush adminstration, etc.”

Nice try, Mrs. Clinton, but your newfound demand for ‘secrecy’ when it comes to our strategy on capturing and killing terrorists doesn’t pass the smell test.

Update: This is freaking hilarious! 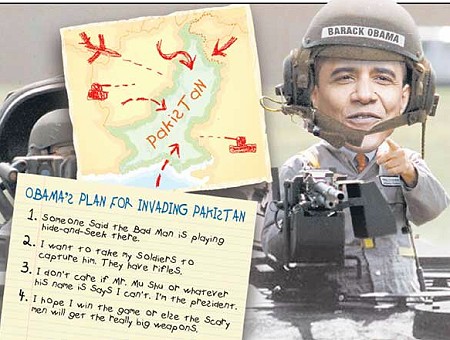 Here’s the Post piece from which that picture came.

7 Responses to "Hillary scolds Obama like a schoolboy, yet contradicts herself (MORE: NYPOST GETS CREATIVE WITH OBAMA PIC)"