The big buzz in the news today is whether or not The Goracle will be the winner of the once-prestigious-but-now-just-a-joke Nobel Peace prize. CNN reports:

“An Inconvenient Truth,” a documentary featuring the former vice president captured two Academy Awards in February. The film focuses on Gore and his worldwide travels to educate the public about the severity of global warming.

Last month Gore picked up an Emmy — the highest award in television — for “Current TV,” which he co-created. The show describes itself as a global television network that gives its viewers the opportunity to create and influence its programming.

On Friday, Gore finds out if he’s the winner of this year’s Nobel Peace Prize.

Although the secretive five-member Norwegian Nobel Committee does not disclose names of its award nominees, it’s been widely reported that Gore is up for the prize.

In February, a Norwegian lawmaker announced he had nominated Gore for the prestigious honor. Gore is in contention thanks to his worldwide campaign to bring attention to the dangers of global warming.

Bookies are predicting that the Goracle will win.

There’s speculation that a win would fuel a Gore ’08 run for president:

But the possibility that former Vice President Al Gore might take the prize has some Gore supporters buzzing that the 2000 Democratic Party nominee for president might be convinced to take the plunge once again.

Gore and Canadian Inuit activist Sheila Watt-Cloutier, who were jointly nominated for the prize for their work on climate change, have been identified as likely winners by Nobel handicappers. If they win, Gore supporters say, it could spur the former vice president to make a late entry into the presidential race.

“Winning a Nobel Peace Prize is a life changing event,” said Dylan Malone, who runs a Web site called AlGore.org, which advocates a Gore presidential run. “If he wins (the Nobel), he will undoubtedly reassess the situation and think, ‘Where do I go next?’ He’s done the slideshow, made the movie, won every accolade that our society has to give. There’s nowhere else to go to take it to the next level in my mind.”

Gore supporters are so excited about the possiblity that their “prophet” might win the Nobel Peace prize that they’ve stepped up their attempts to draft him to run for president:

On Wednesday, the Web site Draft Gore paid for a full-page open letter to Gore in the New York Times. “You say you have fallen out of love with politics, and you have every reason to feel that way,” reads the letter. “But we know you have not fallen out of love with your country. And your country needs you now — as do your party and the planet you are fighting so hard to save.”

The ad said that 136,000 people have signed a petition asking Gore to run for president.

There is one less-than-shiny note for Al Gore this week: A High Court judge in the UK ruled yesterday that there were 9 scientific errors in Gore’s award-winning crockumentary An Inconvenient Truth:

A High Court judge today ruled that An Inconvenient Truth can be distributed to every school in the country but only if it comes with a note explaining nine scientific errors in Al Gore’s Oscar-winning film.

The Government had pledged to send thousands of copies of the film to schools across the country, but a Kent father challenged that policy saying it would “brainwash” children.

A judge was asked to adjudicate between Stewart Dimmock and the Department of Children, Schools and Families. Mr Justice Burton ruled that the film could be sent to schools, but only if it was accompanied by new guidlines to balance the former US vice-president’s “one-sided” views

The judge said some of the errors were made in “the context of alarmism and exaggeration” in order to support Mr Gore’s thesis on global warming.

He said that while the film was dramatic and highly professional, it formed part the ex-politician’s global crusade on climate change and not all the claims were supported by the current mainstream scientific consensus.

The errors are listed at that link.

So tomorrow morning you may wake up to the nauseating news that the “prophet” has won the Nobel Peace prize. Shortly thereafter, you should make sure to turn on and leave on every light in your house, use at least one roll of toilet paper in the bathroom before you leave the house (in honor of Sheryl Crow), opt for use of aerosol cans of air freshener, deodorant and hair spray, fill up your SUV with premium-grade gasoline and take the long route to the airport, where you are to fly cross country on a jumbo jet, and have a huge steak or chicken dinner complete with all the gluttonous trimmings upon arrival to your destination.

After all, isn’t that what Al Gore would do? 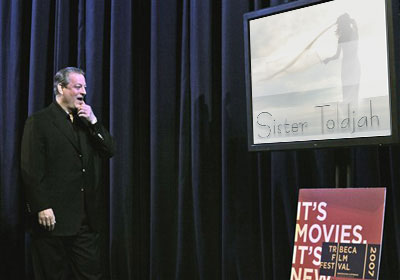 “Why’s that girl always pickin’ on me?”

More: Dymphna at the Gates of Vienna blog delivers a must-read smackdown on Gore here.