Sorry to post this around dinnertime, but I had to write about it at some point – it might as well be now

As I’m sure you’ve already heard by now, today was The Goracle’s big day as he officially accepted his Nobel Peace prize, which he won for successfully scaring the hell out of millions of people with his dubious claims about the end of the world. 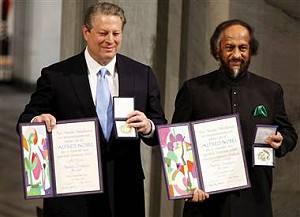 CNN International’s Jonathan Mann, during an hour-long “love fest” in honor of Al Gore and the Intergovernmental Panel on Climate Change’s reception of the Nobel Peace Prize, gushed over the former vice president. “You went from being ‘Ozone Man’ to ‘The Goracle.’ This became — the Nobel Prize became ‘The Goronation.’ You must be conscious of the change in perceptions about you in particular because of that film [An Inconvenient Truth].”

Later, at the very end of the program, Mann speculated that Gore’s prize could actually be shared with all those who contribute to the planet-saving cause. “We may not all agree about the politics of global warming or about the big solutions, but we can all do our own little part, and it will add up. And for that reason, this year, for the first time that I can remember, we can all share the Nobel Prize.”

Sounds like Mann’s been reading up on his Goran (graphic courtesy of The People’s Cube via ST reader Sev). Think he dared to ask the twice-failed candidate for president about the questions surrounding the amount of prophets, er, profits, he makes from his greenie speeches? Nah …

Gore’s ego is so pumped up right now that he’s given his cultish followers reason to hope that one day, just one day, he may make another run for the presidency (emphasis added):

WASHINGTON (CNN) — Former Vice President Al Gore denied again that there were any campaign plans in his immediate future, but told CNN Monday that he hadn’t “ruled out getting back into the political process at some point” — and that if he did return to political life, it would be to take another shot at the White House.

The Nobel Peace Prize laureate, speaking from the Oslo site of Monday’s awards ceremony, told CNN’s Jonathan Mann that he didn’t expect to ever get back in the political process, but that “if I did get back, it would be as a candidate for president.”

On a related note, the Nobel Peace prize concert, which is being held in honor of the Goracle and the IPCC, is tomorrow night at 8 Oslo time. It will be broadcast in more than 100 countries. I’m sure ya’ll will be scouring your preview guides to find out of it you’ll be able to catch it on satellite …

No word yet on the estimated cost of the carbon offsets that will surely have to be purchased in order to “offset” all the carbon dioxide and other pollutants that will be emitted in abundance during tomorrow night’s GoreFest.

Update: Here’s the latest, from the gw wires (h/t: Drudge):

—– A West Australian “medical expert” has called for a “baby tax” in order to offset the carbon emissions a person emits over their lifetimes.

—– The ice cover for the Southern hemisphere remains well above normal.

—- Has there been a “systematic” effort from the WH to “manipulate” climate change? The Usual Suspects are engaging in their typical braying on the subject here.

10 Responses to "The “Goranation” begins"