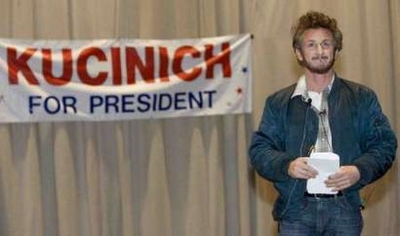 My caption: Sean Penn endorses Dennis Kucinich in San Francisco State University Friday December 7th. In his official announcement, Penn, also a supporter of Venezuelan dictator Hugo Chavez – whose country voted last week not to effectively give him the opportunity he wanted to be president forever – expressed hope that he’d have better luck helping the sinking campaign of Kucinich than he did bailing water out of the sinking boat he used in a ‘rescue attempt’ in New Orleans after Hurricane Katrina. 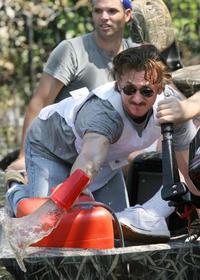 Semi-related: In other celebrity endorsement news, Oprah made a big splash in South Carolina this weekend – to a big crowd of 29,000, who came to hear why she was endorsing Senator Barack Obama for president. Katharine Q. Seelye called it “Oprahpalooza” and has a write-up here, and wonders if there’s ever been a bigger political rally. NRO’s Kathryn Jean Lopez responds.

12 Responses to "Time for another round of “Caption This”"