Yes, it pains me to say it, but sometimes blondes – usually the Hollywood variety – can be really, really dumb. Sharon Stone is yet the latest in a long line of Hollyweirdos (like the troop-hating director Brian de Palma) who are seeking “the truth” about the Iraq war:

CAIRO, Egypt (AP) – Sharon Stone believes the Sept. 11 attacks should not have been used as a pretext for the United States to launch wars in Afghanistan and Iraq, according to her comments published Monday in a pan-Arab newspaper.

In her interview with Al Hayat, the actress also bemoaned what she called Americans’ decision to ignore the deaths of so many Iraqis.

“I feel at great pain when the spotlight is on the death of 4,000 American soldiers, while 600,000 Iraqi deaths are ignored,” she said. “War is not a movie, it is a tragedy of dead bodies, victims, the disabled, orphans, widows and the displaced.”

Stone spoke in English and her comments were translated and published in Arabic. An English transcript of the interview was not available.

Al Hayat published excerpts of the interview from December, when Stone attended the fourth Dubai International Film Festival in the United Arab Emirates. The paper’s sister publication, Leha, is to publish the entire interview Wednesday.

Stone came to the region seeking answers for herself because, she said, the U.S. media has failed to provide Americans with the truth.

“I feel sad when I realize how much truth is being changed or obscured in the American media,” she said.

Stupid witch. Guess who’s thanking useful idiots like Sharon Stone tonight? The same animals who would either stone and/or behead her for some of the filth she’s starred in, including the movie in which she’s become infamous for quite literally baring all.

Now is as good a time as any for another round of “Caption This”: 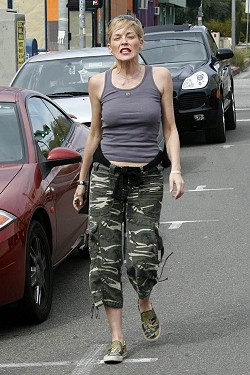 US actress Sharon Stone, suiting up for her Iraq/Afghanistan fact-finding mission. Now if only she can find the keys to her already-running car.
Not pictured: Her brain.

8 Responses to "Sometimes, some blondes really can be dumb"