Last August, I blogged about former Nutroots darling Cindy Sheehan’s announcement that she was going to run as an “independent candidate” against House Speaker Nancy Pelosi because of her refusal to impeach President Bush for “war crimes.” On Friday, she was at City Hall in SF filing the papers necessary to run:

Peace activist Cindy Sheehan wants to snatch House Speaker Nancy Pelosi’s congressional seat from her in November, but first she’s going to need the help – and signatures – of 10,198 friends and supporters.

Sheehan was at San Francisco City Hall on Friday to take out papers for her independent run for Congress, but without those signatures from voters in the district, her name won’t show up on the ballot.

“It’s an uphill battle,” said Sheehan, who vowed to run against Pelosi in July after the speaker refused to start impeachment proceedings against President George Bush. “But I’m excited about the signature-gathering process. It’s going to be an opportunity to talk to people about our campaign.”

The 50-year-old Sheehan, whose son, Casey, was killed while serving in Iraq in 2004, became the public face of the anti-war movement when she mounted a demonstration outside Bush’s Texas ranch that lasted from 2005 to 2007.

Even after pleading exhaustion and closing down “Camp Casey” in May, Sheehan was a regular speaker at anti-war gatherings across the nation. Since moving from Dixon to San Francisco’s Mission District, she’s been campaigning virtually full time.

To get the signatures, equal to 3 percent of the district voters registered for the 2006 general election, the campaign will have people setting up ironing boards and card tables on street corners throughout the city, seeking voters who want an alternative to Pelosi. Sheehan has until Aug. 8 to collect the needed signatures.

If you live in Nancy Pelosi’s district (the 8th, which covers most of SF) and want to see Cindy Sheehan on the ballot against Pelosi in November? In the unlikely event you can’t find any of those ironing board and card table street corners to sign your name on the petition, you can go to her campaign HQ, which is located on 1260 Mission Street in SF, or call them at 415-621-5027 to find out where the closest ironing board/card table street corner petition signing event is to your residence.

Even if she does get on the ballot, she won’t win, as La Pelosi has an enormous following in SF. However, it wouldn’t hurt to give her a little competition, and even though Sheehan seems to be on the outs with the national party, in California she can still draw a crowd, even if it is a small one. 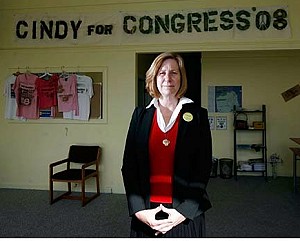 Wonder if she’ll get any financial assistance from her buddy Hugo? Will she receive the coveted endorsements of Joe Wilson and Rev. Al Sharpton?