The polls are set to close in the Puerto Rico primary at 3 PM ET. 55 delegates are up for grabs (and 8 uncommitted superdels), and based on the polling info available, it’s expected that Hillary Clinton will win PR by double digits – maybe as much as 15 to 20 points.

As I noted earlier, though, even though her win in PR will add to her popular vote total, it won’t do much of anything for her general election arguments, as PR doesn’t vote in the presidential elections and as a result doesn’t have any electoral votes to give to any candidate. Still, on the heels of her disappointment over the DNC RBC’s ruling on Michigan yesterday, any symbolic victory at this stage in the game will prove to be a much-needed moral victory for the Clinton campaign, especially going into the final days of the primary season which will likely see Obama pick up the final primary wins in South Dakota and Montana.

Here are some quick facts on the history of the Puerto Rico primary.

To follow the results of the primary as they come in, bookmark this link and refresh it often. 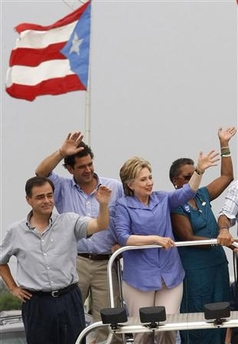 Update 2 – 5:07 PM: CNN and other networks are projecting, per exit polls, a Clinton victory by a “wide margin” – but so far turnout looks low. 29% reporting and 79K votes so far.

Update 3 – 6:44 PM: With 85% reporting, Hillary’s winning by 36% and about 117K more votes than BO. Doesn’t look like the turnout will reach the 500K mark some had predicted it would. She’s already made her victory speech, and used similar talking points in it that she did after her West Virginia and Kentucky wins, talking up her electability, how she’s supposedly won more of the popular vote than BO, and how she’s winning over McCain in the polls in some of the key battleground states. And speaking of the popular vote argument, she’s got a new ad out which strongly emphasizes it.