Yesterday, I wrote about how badly the far left were disappointed over the House Democrats’ “cave” on the FISA bill (btw, the House officially voted today to pass it, and the WaPo reports that the Senate will likely follow their lead). Most lefty blogs were filled with bloggers expressing “betrayal” and “disgust” at how House Democrats “turned their backs” on them – and, supposedly, the Constitution.

The big question after the initial shock for the left was, “What does our nominee think of this shameful compromise?” They got their answer earlier this afternoon after Obama had a day to consult his advisors on what his general election position on the issue should be should be, and if you thought yesterday’s outrage was bad, wait ’til you see today’s. One popular far left blog called Obama the “wanker of the day.”

Welcome to the real world, lefties. Mr. Perfect isn’t so perfect anymore now that you’ve helped moved him beyond the primaries and caucuses. His general election move-to-the-center strategy is now officially in full effect, and you’re seeing what many of us on the right saw and commented on throughout the race to the nomination, and that’s Obama’s ability to say one thing in front of a group of like-minded individuals, but another when he (or his campaign advisors) are behind closed doors meeting with various national and worldly movers and shakers. His evolving NAFTA position (scroll) is a prime example, and so is his newly-minted position on the FISA bill, which goes contrary to much of what he said about it back in February. Tom Maguire talks about a few other shifting positions here (scroll).

Bbbbbut what about McCain? a lefty reading this may ask. What about him? Republicans/conservatives have been critical of him for years, well before he threw his hat into the ring for the ’08 nomination, and have been critical of him the times he’s clearly spoken out of both sides of his mouth. Not many on our side of the aisle view him as “perfect” but instead a flawed candidate who, while annoying on many issues, is right on the one that counts: the safety and security of our nation via continued strong vigilance against those who wish to do us and our allies harm. Most of us are willing to accept him, warts and all, for that reason alone. On the other hand, so many on the left elevated Obama to Jesus Christ in human form, treating him like he could do no wrong, and slammed people like me who routinely said and continue to say (and prove) that the man’s not who/what he says he is. I’m not saying he’s evil or the scum of the earth. Rather, he’s a mere mortal and (gasp) typical of most politicians, contrary to this fantasy image he’s cooked up for human consumption, an image that has been swallowed whole and unquestionably by millions.

Many of those expressing disappointment over Obama’s slick slide to the middle on this issue only have themselves to blame for blindly believing he truly was an “agent of change” and for trying to paint any legitimate criticisms of him by the opposition as meaningless, trivial “distractions” or “bogus smears.” Newsflash: When something sounds like it’s too good to be true, it usually is – and that’s especially true when you’re talking about politicians. No one in politics is as pure as the driven snow, no one.

Not even St. Obama.

Related: FactCheck slams Obama: “Obama says McCain is “fueled” by money from lobbyists and PACs, but those sources account for less than 1.7 percent of McCain’s money.” Jim Geraghty documents another Obama whopper.

At a discussion with a dozen Democratic governors in Chicago on Friday morning, each of the governors was identified with a small name plate but Senator Barack Obama sat behind a low rostrum to which was attached an official-looking seal no one had seen before.

It is emblazoned with a fierce-looking eagle clutching an olive branch in one claw and arrows in the other and is deliberately reminiscent of the official seal of the president of the United States. Around the top border are the words “Obama for America;” across the bottom is the campaign’s Web address. It also contains the logo of the Obama campaign, variously interpreted as a sunrise or a view down an open road.

Just above the eagle’s head are the words “Vero Possumus” roughly translated “Yes we can.” 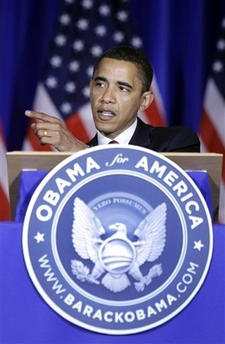 Compare that to the official Presidential Seal as well as the Great Seal of the United States.

CNN has a side by side comparison of the Obama “seal” and the Presidential Seal.

Can you believe the sheer arrogance of this guy? His own freakin’ logo in the middle of the American Eagle and his campaign slogan written above it in Latin? I guess I shouldn’t be surprised, considering the creepy posters of his image being sold at his website, but still … !

I guess the only question left to ask is: What mediot helped him come up with this idea?

14 Responses to "Liberals to Obama: Dude, who the hell are you? (PLUS: OBAMA’S “PRESIDENTIAL SEAL”)"