I was a bit under the gun earlier today and didn’t have much time to blog about DNC ’08-related news, but now that I’m home I’ve had some time to catch up a bit, so here goes.

—–Â  Here’s the schedule of today’s/tonight’s events.Â Â  If you’re at work and can’t get to a TV,Â you can watch it on C-SPAN.Â  The big news is Michelle Obama is scheduled to speak later this evening.Â  Here are excerpts from her speech.Â  If my memory serves me correctly, Teresa Heinz-Kerry and Laura Bush both spoke at their respective conventions the nights before their husbands took the stage to make their respective acceptance speeches.Â  Perhaps the organizers of the this year’s DNCÂ event decided to have Mrs. Obama on the first night so any gaffes/ridiculous remarks she might make will have time to work the news cycle for a couple of days and fade away by the time Obama makes his acceptance speech Thursday night at Invesco field.Â Â  Just a guess.

—– There were reports that Senator Ted Kennedy, who is battling brain cancer, might make a speech tonight at the convention.Â  Contrary to those reports, it is unlikely he will be speaking but he will be in attendance to watch a tribute that will be narrated by hisÂ neice Caroline.

—— Liberal pundit Ezra Klein is in Denver covering the goings-on and has an interview posted that he did with two Clinton supporters who will now be voting for McCain.Â  I’m hearing rumors that in some parts of the country tonight disgruntled Clinton supporters will be going door to door to urge people to vote for … McCain while wearing Hillary Clinton t-shirts and Mc buttons.

—– The rock stars are lining up: Editor and Publisher reports that it’s all but been confirmed that Bruce Springsteen and Bon Jovi will be the ‘opening act’ for Obama before he takes the stage on Thursday night.Â Â Â  Aww, no room for that “great talent”Â Ludacris on that stage?

—– The NY state Dem party is warning their delegatesÂ to watch how much they drinkÂ at the DNC.Â  Maggie Haberman at the NY Post writes:

On a page titled “high-altitude tips” in a packet sent to traveling New York Democrats, there were repeated reminders that the air up here is different.Â

“Please monitor yourself, and remember that drinks may go to your head faster than you’re used to in New York,” was the first cautionary paragraph. “We don’t want any of our members to miss Delegation events or proceedings, so please stay safe.”

—– Team Obama has released an ad (h/t: STACLU) responding to the release of the American Issues Project‘s ad questioning Obama on his ties to unrepentant domestic terrorist William Ayers.Â  In Obama’s ad,Â theÂ announcerÂ appears to blame McCain for talking about it, when the only people I’ve seen bring it up are AIP.Â Â  I’ve not heard McCain mention it unless asked about it – and even if he has brought it up, it’s a legitmate issue.Â Â  Commentary’s Jennifer Rubin tries to make sense of the Obama ad:

ANNCR: With all our problems, why is John McCain talking about the sixties, trying to link Barack Obama to radical Bill Ayers?

Let’s talk about standing up for America today.

A McCain spokesman fired back: “The fact that Barack Obama chose to launch his political career at the home of an unrepentant terrorist raises more questions about his judgment than any ad ever could. And the fact that he’s launching his own convention by defending his long association with a man who says he didn’t bomb enough U.S. targets tells us more about Barack Obama than any of tonight’s speeches will.”

What would possess the Obama camp to go down this road? Obama’s lame defense of the relationshipâ€“that he was eight when Ayers committed his crimesâ€“is, of course, entirely irrelevant. His association with Ayers, as Hillary Clinton pointed out in the Philadelphia debate, ran deeper than he has tried to present it and it began and continued when both men were adults, long after Obama had become acquainted with Ayers’s past.

Exactly.Â  So what gives? And does anyone believe McCain would ever get away with having a close association with, say, Eric Rudolph?Â  Barack Obama’s answers on his relationship with Bill Ayers aren’t cutting it.

—– Last but not least, Pajamas Media has tons of links to on-site conservative and liberalÂ citizen journalists who are following and documenting the action.Â  Make sure you visit there often for updates.Â  Here’s the latest from Zombie, whose reports are also cross-posted at PJM. 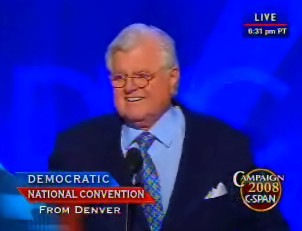 Update 2 – 10:30 PM: They’re showing a video on Michelle Obama now.Â  She should be up to speak shortly, after her brother makes the intro.