Forbes.com’s Peter Robinson writes this morning about how, stimulus bill or not, on the first real test of Obama’s presidency he has been a spectacular failure:

President Bush’s moment of nakedness took place more than four years and eight months into his administration. In office less than three weeks, President Obama has already provided a naked moment of his own.

The episode, of course, concerns the legislation now referred to only laughingly as an “economic stimulus.” Drafted by the Democratic leadership in the House of Representatives, the bill represents a sham and an outrage. Of the more than $800 billion in spending that the legislation authorizes, less than $100 billion would go to highways, the electricity grid or destinations that might–might–produce genuine economic growth. The rest? Transfer payments to interest groups. More than half the “emergency” spending would not even take place until fiscal year 2010.

As Washington observers recognize, this entire debacle became predictable the moment the then president-elect decided to permit the House leadership to draft his stimulus legislation. While Obama was behaving like a professor, holding seminars with economists Lawrence Summers, Paul Volcker and Christina Romer, Democrats in the House were behaving like politicians, using Obama’s call for a stimulus as cover for forking over tens of billions of dollars to Democratic interest groups.

You didn’t even have to be a practicing politician to see what would happen. Even an intellectual like Obama himself ought to have been able to figure it out–any intellectual, that is, who had bothered to read the work of Nobel laureate James Buchanan. As Buchanan long ago noticed, economists who support Keynesian spending programs in theory tend to overlook the self-interested behavior of the politicians who must spend all the money in practice.

Permit House Democrats to draft his stimulus legislation? What could Obama have been thinking? Only one answer fits: Obama wasn’t thinking.

After the Harriet Miers debacle, Bush quickly recovered the support of Washington Republicans. He nominated Samuel Alito in Miers’ place and then returned to his other duties as chief executive. That was that. Nobody ever had Bush figured for a brilliant mind anyway.

In recovering from the stimulus debacle, Obama is unlikely to prove quite so lucky. A brilliant mind is exactly what Obama’s supporters in Washington thought he had. Brilliance defined Obama. Brilliance is what Obama was all about. Now we know that he has already made some dumb mistakes.

The glee among Republicans right now is only to be expected. The long faces among Obama’s startled supporters in Washington are a lot more telling. 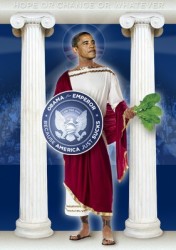 Speaking strictly for myself, I feel no “glee” in any of this. Most of us felt in the back of our minds that Obama’s inexperience was going to shine through in the opening weeks of his presidency and were skeptical that he would be that “bipartisan president” he promised to be during the course of the campaign, but we kept an open mind in an effort to see what would happen during his first real test as president. Instead, what we got in the opening week was a meeting with GOP leaders in which he scolded them about listening to Rush Limbaugh, saying in so many words that that’s ‘not the way things get done in Washington’ – as if to suggest that the GOP gets their marching orders from Rush Limbaugh. Right away, this type of rhetoric was an opening salvo that indicated that instead of viewing the opposition as equals, Obama was going to try and minimize their opinions as being dictated to rather than being opinions bourne out of careful research and study of their own.

Then, after a week or so of heavy negotiations between his party and the opposition, he had to ‘escape’ from the WH, not once, but twice, because the back and forth was getting to be too much. And in the middle of all that, he goes off on a shameless partisan tirade in front of his party that should have never been broadcast on national TV, dissing the very people in the opposition party that he pledged to work with as though their concerns were completely irrelevant. But in his typical arrogant fashion, a speech that originally was not supposed to be broadcast was – at his insistance, so Americans across the country got to see the Obama the presidential candidate, not President Obama.

Add to that the repeated problems he’s had with some of his nominees and picks for his cabinet and admin – the number of which, to my knowledge, is unprecedented in modern history – and the exposure of Barack Obama as an emperor with no clothes in the first few weeks of his administration is complete.

From the looks of things right now, he’s going to get his stimulus bill next week, which the usual suspects in the mainstream media will hail as his first ‘victory’ as President, but conservative pundits should not let the opportunity pass them by to point out how our “brilliant” President acted throughout the entire process: like a petulant teenager unable to get his way, rather than the leader of the greatest country in the world.

In 2007 and 2008, Obama was given virtually no vetting by a media deep in the midst of a “slobbering love affair,” to borrow from the title of Bernard Goldberg’s latest book. (Incidentally, Bernie will be a guest on this week’s PJM Political show tomorrow on Sirius-XM satellite radio.) He (Obama, not Goldberg) encouraged voters to view him a cipher that they could project onto any and all hopes they wanted. He frequently engaged in messianic rhetoric while campaigning, and seemed to encourage similar responses from his more rabid fans–certainly, he did nothing to tamp down such responses.

Even when he won the election, and the media’s comparisons to Lincoln, FDR, JFK, and other presidents venerated over decades or more of history continued, Obama consciously played into them, jetting back to Chicago and taking the train, a la Lincoln, to his inauguration.

What could go wrong once it became time for the least experienced executive in the nation’s history to actually govern?

What went wrong? He counted on the House and Senate GOP to be so entranced by his presence, and so humbled by their own losses last year, that they would roll over and give him what he wanted on the stimulus bill, and his nominees. The GOP faked him out big time on that front (especially John McCain), and if there are any winners in all this, it’s that the GOP finally have their teeth back. Amazingly enough, a majority of Americans don’t even want a stimulus bill, but that same poll showed that if we were going to have a stimulus bill, that the American people believed it should contain more tax cuts in it than spending. The Democrats being poll hounds themselves should take notice, because the party fighting for the tax cuts in this bill was the loyal opposition. Knowing that there was going to be a bill of some sort passed, the GOP delivered on this bill as much as they could as it relates to tax cuts – keeping in mind the concerns of the American people, while the Democratic “leadership” – including the President himself – whined and sulked, and engaged in fearmongering, and said “pass something NOW and we’ll worry about the details later.”

Where does this lead? Serious concern on the horizon. President Obama’s shown in the first three weeks of his presidency that all the Harvard education in the world won’t make him a great leader once all the cards are out there on the table. He’s shown that his “negotiation skills” are sorely lacking, primarily because he left most of them in the Ill. State Senate 4 years ago. He had no real accomplishments during his limited time served as a US Senator, had to do no tough negotiations with the opposition during that time, and that lack of experience shows today.

If he has this much trouble going toe to toe with the GOP, what does that mean down the road for when he surely will face even bigger challenges? ST reader GWR boils it down:

Tested? You ain’t seen nothing yet. If he’s going into these histrionics over opposition from the House GOP, wait till he has to deal with the overseas enemies. You can bet the Russians and islamofascists already have him measured. And they’re not worried by what they see.

Unfortunately, he’s right. They’re not worried, but we should be.

11 Responses to "The emperor has no clothes"