We are in possession of a video from in which Shirley Sherrod, USDA Georgia Director of Rural Development, speaks at the NAACP Freedom Fund dinner in Georgia. In her meandering speech to what appears to be an all-black audience, this federally appointed executive bureaucrat lays out in stark detail, that her federal duties are managed through the prism of race and class distinctions.

In the first video, Sherrod describes how she racially discriminates against a white farmer. She describes how she is torn over how much she will choose to help him. And, she admits that she doesn’t do everything she can for him, because he is white. Eventually, her basic humanity informs that this white man is poor and needs help. But she decides that he should get help from “one of his own kind”. She refers him to a white lawyer.

Sherrod’s racist tale is received by the NAACP audience with nodding approval and murmurs of recognition and agreement. Hardly the behavior of the group now holding itself up as the supreme judge of another groups’ racial tolerance.

The second video affirms the real reason there is tension between the Democratic Party and a growing mass of middle Americans — and it’s not because of race.

The NAACP which has transformed from a civil rights group to a propaganda arm of the Democratic Party and social-justice politics, supports a new America that relies less on individualism, entrepreneurialism and American grit, but instead giddily embraces, the un-American notion of unaccountability and government dependence. Shirley Sherrod, a federal appointee who oversees over a billion dollars of federal funds, nearly begs black men and women into taking government jobs at USDA — because they won’t get fired.

This, my dear readers, is the modern day Democrat party in a nutshell. Shamelessly playing the race card and discriminating at will, while at the same time promoting growth – government growth. These videos are both disturbing and troubling, but certainly not shocking.

I’ve written about black racism over and over and over again at this blog (see the category links below for more). Simply put, it’s ok to be a racist in this country as long as you are a black Democrat. How many racial remarks have the racist/Jew-hating Reverends Jackson and Sharpton uttered over the years without being called out on them? Did Sharpton ever apologize for the Tawana Brawley hoax, or the Freddie’s Fashion Mart tragedy? It’s also ok to be a race-baiter in this country as long as you are a Democrat. How many more Democrats – black and white – have gotten away with race-baiting and race demagoguery over the last several decades at the expense of decent conservatives and Republicans all over the country? I’ve lost count, but you can find several examples of them both here at this blog and others.

Why do white Democrats allow black Democrats like Sherrod to get away with the racist things that they say? A long time ago, I used to think it was because the Democrat history on race was so appalling that the free passes given to their fellow party members was sort of their way of “atoning” for their despicable over-100-year history of keeping black people down by using the force of discriminatory laws – and brutal waves of violence. Since that time I’ve woken up, grown up, and smartened up and realize that they don’t do it to “atone.”

They do it because it helps them win policy battles and elections, if they play their (race) cards right. 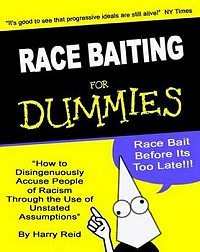 They know that all a Democrat has to do is place the race card front and center on the table in order to get some Republicans and conservatives to back off out of sheer terror that they are going to be branded a racist when in most cases they are not. And, of course, the mainstream media has been a willing promoter of this POV for decades as well. Ever since the 1964 CRA was passed and the Democrat hold on the black vote was all but done, Democrats have gotten away with being the “authoritative” voice on race issues in the media because they managed to get one civil rights act out right of the numerous others that were passed prior to that one by REPUBLICANS and signed into law REPUBLICAN PRESIDENTS – passed & signed into law, I should note, with little to no help from Democrats. Not even those in the North, the ones that, you know, were/are supposed to be so “open-minded” about such issues. And need I remind everyone that the 1964 CRA would not have passed without Republican support in the first place, because Democrats couldn’t get the racist elements in their party to go along with it?

History – true history, not the politically correct stuff – shows which party has the worst record on race issues, and it is not the Republican party. Even the so-called “Southern Strategy” that Democrats love to bring up as a way to continue to paint the GOP as racist had more to do with economic appeals to disaffected Southern Democrats than subtle “racial undertones.” Think about it, after the 1964 CRA was passed and the so-called “racist” Southern Strategy was implemented, how many Congressional Democrats actually switched parties and became Republicans? Strom Thurmond did in the Senate, and you had a handful in the House but that was it. Contra to conventional wisdom, southern states like North Carolina did not experience a mass exodus of “racist Democrats” moving to the Republican party. If we had, the NC general assembly – both the House and Senate – would have gone GOP and have stayed that way. Instead, the NCGA has been a virtual lock for Democrats since the mid 1850s, with the House only going to the GOP a handful of time. This state also routinely elects Democrat governors even though it usually votes for the GOP candidate for president.

You’ll find similar stories in other southern states like Georgia, Louisiana, and West Virginia – home of the now-late Senator Robert Byrd, a former member of the KKK who stayed with the party even after the 1964 CRA and who did NOT join the KKK to “get elected” as our former adulterer-in-chief Bill Clinton asserted at Byrd’s memorial service a couple of weeks ago. Not only that, but GOP presidential nominees were making inroads with Southern voters starting in 1952 presidential election, when Eisenhower won TN, VA, and FL. He won more in 1956. And, it should be noted, Eisenhower was one more in a long line of Republicans who tried to pave the way for equal rights for black people, signing into law two civil rights acts – acts which, in turn, paved the way for the 1964 CRA. Republicans were making headway with Southern voters – Democrat and Republican – well before the “racist Southern Strategy” was put in place. 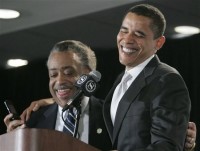 But because Barry Goldwater opposed the 1964 CRA on state’s rights grounds (not racial grounds) and because of the misunderstood and misreported “Southern Strategy” Republicans get villainized by both the MSM and Democrats. And they’ve gotten away with it for decades when all evidence points to the fact that the most racist folks in America are not Republicans, but Democrats. Is that to suggest that there are “no” racists in the Republican party? Of course not. But the ones who are and who get caught at it are usually roundly condemned by other Republicans and conservatives and are ostracized. On the other hand, racist Democrats like Jackson and Sharpton and their “organizations” (Rainbow PUSH and National Action Network) are welcomed, embraced, and sought after by presidential candidates for member support – and these racists have stood on stage side by side with Democrat candidates for president in order to debate the future of America.

Now just imagine a Republican presidential debate where white men and/or women who uttered similar racist remarks that the Sharptons and Jacksons of the country have said were allowed to participate. It won’t happen. The mainstream media will see to that, and they will be urged and encouraged along with the help of Democrat party leaders, pundits, and public figures … like Sharpton and Jackson, who are, laughably, “respected” voices of debate on race issues, much to the dismay of the growing number of outspoken black conservatives who are sick of having the likes of Jackson and Sharpton pretend that they speak on behalf of “all black Americans,” much in the same way conservative women are fed up with NOW acting like they represent “all women.”

But as I have said before, while there might be a tiny minority of racists in the Republican party, you have to look at the policies of both parties to see which side ideally could help the black community more. And the Democrat victim/gimme strategy certainly has done NOTHING to help any community but especially the black community, whose family structure was deeply damaged in the years following the passage of the Great Society programs.

Really. When I think about how warped our racial culture is in this country, and the hypocrisy of the Democrat party on this issue, I sometimes feel like I live in an alternative universe. I’m sick of the one-sided race discussions in this country. I’m sick of black conservatives being treated like “Uncle Toms” and being called “Oreos” by black Democrats simply because they choose to believe in smaller government, lower taxation, the sanctity of life, and personal responsibility.

Never forget, despite of all the background noise and in spite of the fact that a few in the GOP are racist, that the most intolerant, uninclusive, hateful, racially divisive and insensitive folks in America will be found in the Democrat party – especially in “leadership” positions, positions that come with them a great deal of responsibility and influence. It’s an influence these leaders know how to effectively use. But as to the being “repsonsibile” part? Well, let’s just say there’s a reason why Democrats don’t fly the banner of “personal responsibility.” This crowd has never made a mistake in modern day history that they haven’t tried to blame the other side for. But as they’ve found out over the last 10 years – especially with the rise of New Media – “the other side” isn’t going to take it anymore.

My co-blogger Anthony aka Phineas has more at his blog.

Update 1 – 11:54 PM: Big Govt is reporting that Sherrod has resigned (via my awesome co-blogger in the comments section).

Racism is about abuse of power. Sherrod had it at USDA. She abused a white farmer because of his race. NAACP is appalled.

I reject wholeheartedly the notion that the only time racism can be racism is when there is a power issue involved, but whatever. This is the best we’ll get from him.

The head of the Atlanta chapter of the NAACP has condemned Sherrod as well (hat tip).