Rebecca at Doxology points out that Planned Parenthood Toronto’s list of links for teens to visit in order to get more information on ‘sex education’ includes this link.    For those of you who don’t have Flash installed on your computer, scroll to the bottom of the flash page to click ahead to home page.  Here’s a screencap: 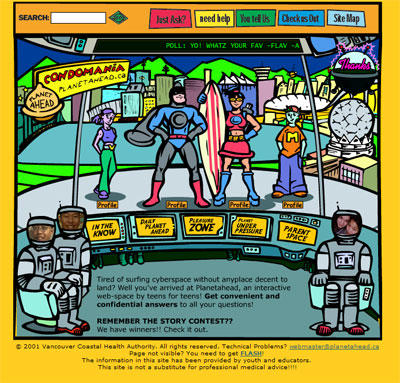 Doesn’t that look ‘fun’?! Make sure to read the entire piece at Rebecca’s for more nonsense from other groups besides Planned Parenthood who claim to have our/their young people’s ‘best interests’ at heart.

Related: The Dawn Patrol (who I just added to the ST blogroll) discusses a cartoon (yes, another cartoon) done by Planned Parenthood Goldengate in which the characters in this ‘cartoon’ blow up pro-lifers by encasing them with a condom …. via a condom gun.   It’s incredibly telling that these ‘pro-choice groups’ use cartoonish characters in an attempt to ‘educate’ young people about safe sex.   Just who do cartoons appeal to the most?

Now ask yourself, why would Planned Parenthood make a cartoon glorifying abortion and pushing violence against pro-lifers? What’s the market they hope this cartoon about an aborting, condom-slinging superheroine reaches?