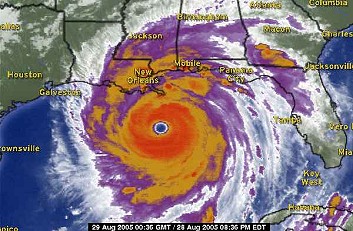 The satellite pictures are not pretty.  Maximum sustained winds right now are at 160 mph, travelling NNW at a speed of 11 mph.  Last information I heard, this category 5 hurricane is exepected to make landfall in New Orleans between 3 and 4 a.m. CT Monday.  Our friend and commenter here Big Bang Hunter posted this in another thread (as I was remiss in not starting one sooner but I’m trying to make up for lost time):

ST – Politics aside, for those that havn’t been able to keep up with the news. Hurricane Katrina has been elevated to a category 5, with sustained winds exceeding 165 mph, with gusts to over 175. Considering that the central winds generally accelrate even more as a storm reaches a coast line, thats going to make Katrina the strongest storm ever recorded in Gulf coast history. Louisiana and Miss. have been decalared in a state of emergency, with over 100,000 people still trapped in New Orleans, the point of expected landfall. Everyone should say a little prayer for the people of the area. This could be a real disaster, owing to the below sea level topography of several places in the path of the storm. President Bush is working with the Governors of the threated states and is expected to enlist the National Guard and other available emergency services from neighboring uneffected Regions. Some people are being checked into the [S]uperdome to ride out the storm, as many as 45,000 people may take shelter there.

Most of New Orleans lies below sea level, so this hurricane could completely devastate that area.  Hurricane Katrina is being compared to Hurricane Camille, which struck the Mississippi Coast in August 1969:

It would be the strongest storm to batter the Mississippi Coast since Camille raked across the state killing 131 people in Mississippi alone, and leaving another 41 missing in August 1969.

Another 216 were killed as Camille moved through Tennessee, Kentucky, West Virginia and Virginia.

Camille was the most powerful and devastating hurricane to hit Mississippi and was one of only three Category Five hurricanes to hit the U-S mainland since 1900.

The folks in that part of the country will definitely be kept in my thoughts and prayers and hopefully yours too.    Anyone who reads this blog from the affected areas, I hope you will check in as soon as you can to let us know you’re ok.

4 Responses to "Katrina getting ready to slam NO"